Who's ready for new laser software?

So, I know you all love it when I change the laser software, right?

I’ve installed a new laser control program called LightBurn on both of the laser computers. I’ve tested it out a bit and quite like it so far. It is fairly similar to RDWorks, much easier to use than LaserWeb, and can be used with either laser. We need to do some more testing, and put together some instructions (@kim, you love doing that, right?). RDWorks and LaserWeb are both still installed, so you can keep using them as well. In the long run, if LightBurn works out well we will probably want phase out the other 2 to avoid confusion.

So, if you want to jump on learning the new software let us know. We need some guinea pigs for testing. If you have a file that never worked right in LaserWeb it would be a good test to see how well LightBurn handles it.

Overall I think this will be a very positive change for the usability of our laser cutters. If you have any questions, comments, concerns, etc. leave a comment below.

Here is a quick summary of pros and cons for this software.

I’ll volunteer as a Pig from Guinea, although I don’t have any files I can’t get to work. I do, however, have plenty of projects to test it on. Mostly cutting thin black acrylic.

Everyone hates change, but I REALLY hate laser web, so this might cancel out.

Here are the things I most hate about laser web, are they fixed in lightburn?

There’s not really anything I hate about RDWorks, so I guess I want to ask what’s keeping us from just converting the red laser to use RDworks, is it an issue of having to buy another controller? Well… it’s annoying that you have to convert svg to dxf for rdworks, but that’s not so painful, other than that I like rdworks a lot.

Button text looks fine to me. The only things in the LightBurn UI so far that seem a bit too small to me are the toggle switches.

No good defaults, so every time we engrave we have to set the beam width, overscan, burn white off

LightBurn has a preferences file that can be modified to change the defaults. It also has a material library where we could set up defaults for different materials.

Everything I’ve tried so far has loaded and run quickly, and I did try a couple complex designs. I’d like to gather a number of files that completely suck in LaserWeb and see how they do in LightBurn.

I’m pretty sure the issue where Mario disconnects and won’t reconnect without unplugging and plugging the usb multiple times is an issue with the control board rather than LaserWeb, in which case this software won’t fix it. However, while I was testing I did not have any connection issues.

so I guess I want to ask what’s keeping us from just converting the red laser to use RDWorks, is it an issue of having to buy another controller?

There are a number of advantages to using LightBurn on both lasers instead of swapping to RDWorks on Mario:

You should really try it out and see what you think. It is installed on both laser computers. You can also download the software and use it as a free trial for 30 days if you want to explore the interface and test file loading at home.

I’ll be at the space this evening, anyone want to meet up before the board meeting and check out the new software?

What time is the meeting?

I’ve showed LightBurn to a few people and the feedback so far has been very positive. I’ll be at the makerspace in the evening on Monday, Tuesday, and Wednesday if anyone wants help learning how to use the software. Just post here or send me a message to let me know when you plan to stop by.

Bringing our monster file of Ticket to Ride on Monday around 6 - 6:30!

Cool, I’ll see you then. That should be a good test.

I am ALL FOR a common piece of software for both lasers. I learned on Luigi and use Illustrator at home for my designs. It’s been very frustrating and cumbersome to get my files to work right with Mario and there’s times when I just give up on it and wait for Luigi to become available.

But apart from my personal experience, a common workflow for both machines just makes good sense. I think both lasers would end up getting used more often and more efficiently. In that regard, it doesn’t matter to me whether the common platform is lightburn or RDworks but it sounds like lightburn would be worth the investment. I can’t wait to try it out. Thanks so much for pursuing this!

A post was merged into an existing topic: It’s Kiosk time!

I taught the rotary class a couple days ago using LightBurn. Things went pretty smoothly; I think the interface is a lot easier to learn than LaserWeb, and probably RDWorks as well. The only issue was the disconnect problem that we also have with LaserWeb.

Could someone write up a procedure for homing the head? That’s the only bit I couldn’t figure out on my own.

Same here, Kim. Only way I got that to happen was on the machine’s keypad but I know it’s in the program somewhere!

There is a home button in the move tab. It’s shaped like a house. Is that what you are looking for? 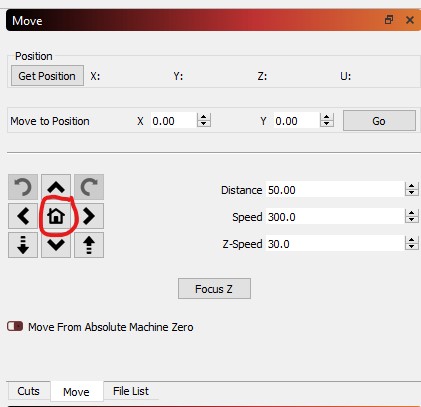 Doesn’t that just send the head to the start spot in the upper right hand corner? I think that was my experience with it.

Yep, that’s what homing does. What were you trying to do?