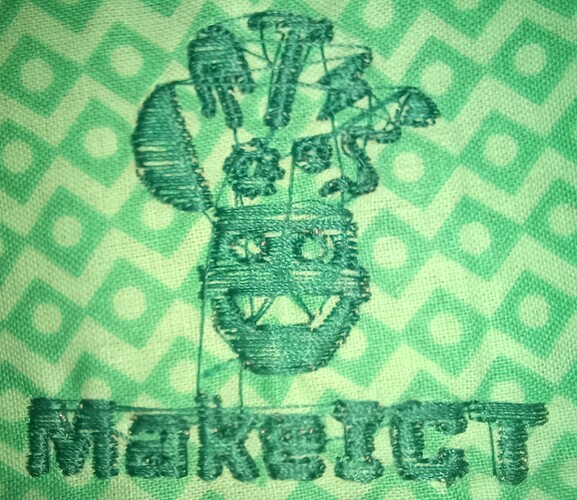 Which was/is a pain.

To start to document the process half for my own reproducibility.

You need an SVG.

Install is fortunately easy if you are on most mini distros:

Then (outline only omit the efill)

Then unfortunately the software to transfer it to the card, will not read it.

So we’ll use libpes to take it back to an SVG then to another PES file. libpes will probably need building from source.

Once built, in the tools there are pes-to-svg-emb and svg-emb-to-pes

Run the first to generate the SVG it will like (It does not like files directly out of inkscape), then the second for a PES (OUTPUT2.PES) that will work.

Then get out the PED reader, it is on #1 right now.

Program is called PED Basic, and you’ll need to navigate to your PES file. The add it to the right side, and write it. Don’t rely on it to remain on the card, as it overwrites each time.

Thanks to @sdowens for tracking down a card however many months ago.

(This needs to be compiled from source.)

Use it’s embroider tool to create a PES file. Which can be thrown into libpes

Let me see if I understand you correctly.

It is possible to generate an embroidery file from SVG that our machine will read… but it is kind of a pain.

This is how you got it to work:

Do I have this right?

You’ve pretty much got it, but Step 2/5 may not always be needed, as sometimes PED-Basic will read PES files out of vpype, sometimes it won’t and sometimes libpes will make the special svg files it won’t take as input.

Some notes:
The default spacing on efill is a bit lose, so instead of the default of 0.04mm, I tested one with 0.02mm, which is good or bad depending on the thread. 0.03 seems like it’d be better for most.

The colors may need to be done by hand still in the 2nd SVG. vpype has options which should work, but so far I haven’t been successful.

It doesn’t handle going between objects nicely, so I had to manually trim them (accidentally got some I wanted to keep on the 3rd one). I think that the fix is an easy software fix, but will need to test it. 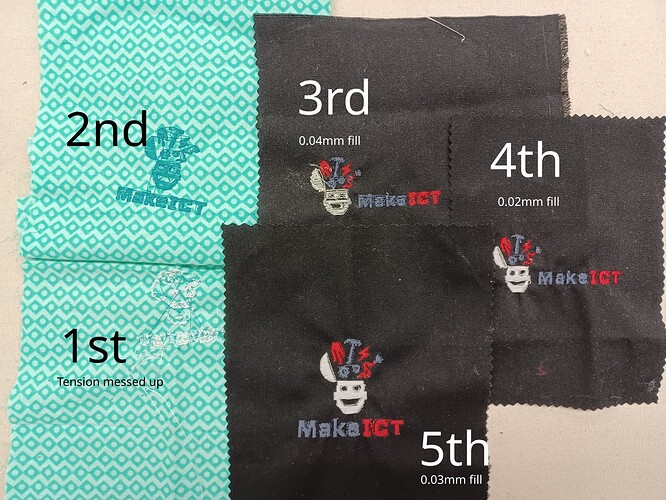 The max stitch length should probably be lowered both for speed and for consistency, as the long stitches on for example the face, are a bit problematic.

If anyone is interested in the process, I’ll see about being at MakeICT at 1900/7pm Tuesday the 6th.

I have some embroidery software if you want me to try and digitize this. I am by no means experienced at it, but I can give it a go. I may have some time tonight to play around with it…I’ll send a picture if I do.

Also, I just realized that you programmed a cnc route using an svg to make a satin stitch of the logo. Screw digitizing this for real. I’m seriously impressed right now…

Okay not really, I’m still going to try to digitize it…

Is there space in the machine to store a .pes file or is it a byo-usb drive?

It uses a proprietary card. James has one and the device that reads and writes it.

If we are going to do embroidered MAKEICT shirts for fundraising sign me up for 2. Seriously cool.

It’s the PED Basic card that @sdowens got for the space, not my card. It’s why laptop #1 is involved at all. I’m going to be heading down there to see about improving the process and doing some experiments with @ladeana in a little bit on her machine as well. @LauraP, you are more than welcome to join, if you’ve got the time.

The PES files are small, so yeah there’s plenty, and if you’ve got a chance it’d actually be good to compare between the outputs, as some things like auto trimming only work between thread changes, so that’s one of the things we are going to look at is trying to get that to work, to reduce the need to manually trim it. (Machine may not do that automatically at all, but it can trim the thread, so there are a few workarounds like faking thread changes/splitting it into files by color (so you hit the button multiple times faking a thread change, long stich that it may trim, etc. that we’ve come up with.) Along with a better fill stitch setup.

I am by no means an expert but I know how to import an image into the software and have it auto generate a fill stitch. I made something up quickly and am stitching it out now just to see. Do you or @ladeana want me to email the .pes? I may be in tomorrow or Sunday and can bring it on a usb then. 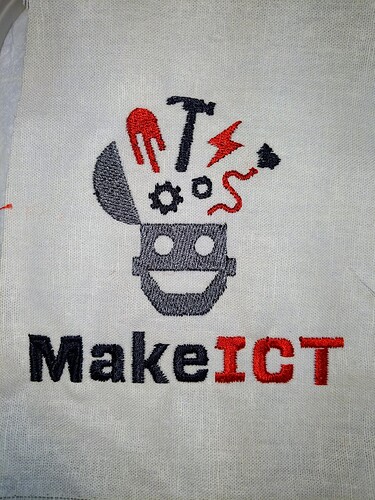 I need to play around with the letters because the fill there looks sloppy but it’s not half bad for my first attempt at digitizing.

Not bad at all!

For back to looking at other software and Inkstitch seems to be work a lot better than modifying things, so that’s what I’m going to suggest for people to use in general. 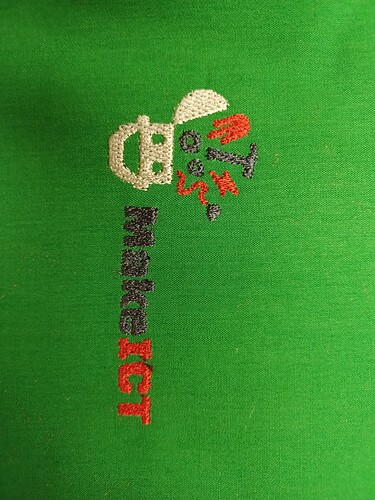 After some trimming and resetting to default, that’s basically directly out of inkscape. (Pretty much load SVG, (rotated) then File save copy (Type: Inkstitch → PES)

The machine at MakeICT does not do trims except for thread changes. Seems to be a bother machine thing as @ladeana brought in her machine to test as well. (The commands are in the file. There was the idea of below some distance being converted to jumps, but even from basically lower left to upper left didn’t trigger it, so that’s not it.)

Sign me up for having this on a shirt. What would someone charge for doing it, assuming the shirt is provided by me?

The machine at MakeICT does not do trims except for thread changes. Seems to be a bother machine thing

It’s an under $1000 machine thing. Some bells and whistles don’t come cheap or free.

T shirts are hard to hoop and keep stable. I worked in a drapery workroom in Austin we were being charged $25 per shirt for 3 letters, 7 years ago. The owner decided to buy a used machine and do it in house. I figured out the process, made notes on how to do it with pictures,and what stabilizer to use. No one, but me was able to create a stable un-puckered design on the knit. Hooping and keeping Polo shirt knit in the hoop was difficult because of the thickness with the stabilizer.

About 5 years ago, I ordered a few Polo shirts with our logo for myself from Queensboro. Looks like they were $27.95 each, but were very good quality and the embroidery was top notch. Not quite the same as DIY, but if anyone is interested, I can pass the contact info along.

Great job! I love the idea of free software and had no idea it even existed. I was gifted embird some years ago and don’t really recommend it. It is clunky and lacking in support, etc.

When playing with the software yesterday, there’s actually a line in the command that tells it to jump. Perhaps the software didn’t add a proper “stop” and “jump” between the objects?

There are machines that trim these jump stitches, but it is determined by length and I think they have to be jump stitches that are larger than 5mm. I don’t have a machine that does this as they are expensive, but can “trick” mine by adding color stops/changes between each item. This is more of a pain than it’s worth for me so I don’t do it often.

So now we can make patches? Like merit badges?

I always wanted a set of MakeICT and Integra patches with magnets on the back like the fancy nametags so I can LOOK like I’m wearing an embroidered shirt, but really I’m just swapping out the embroidered part to different shirts.

Really opens up the possibility of work wear at that point.

The military does this with Velcro!

I’m am painfully aware. I was stationed in Germany when they went from acus to bdus. Had one soldier that could not get them on straight. I’d line them up before shift and by pippens pursestrings his was setup like a soup sandwich. He’s a staff sergeant last I heard.

I thought about velcro too actually… as well as other companies. Like umbrella, apature science… even ones like Bob’s mortuary you stab 'em we slab 'em…

About the third time they see the same shirt with a different company on it they would start to get wise… which is fine.

Yes we could make patches. (Like girl scouts… or boy scouts.)
Dabbler patch for someone who does one class from each area, for example.