A lot of research has gone on, but it sounds like even though we would need a sign maker to make the actual sign and take care of permitting, we would still have artistic free reign over the monument that the sign sits on (within reason of safety and maintainability).

There’s been a lot of coordination with the city on this project already to make sure things are clear and understood. Sherry and I have been the ones talking with people in the appropriate offices of city hall. If you have a question, please remember to be patient and ask either Sherry or myself first since there’s a good chance we have looked into the issue you are concerned with.

The bulk of the requirements comes from the Kansas Code of Ordinances: Title 24 - Billboards and Signs, but there is also input needed from Wichita Public Works and Utilities (PWU) and the Wichita Metropolitan Area Building and Construction Department (MABCD). The Title 24 is more concerned about the sign itself and not what the sign sits on / hangs off of. The PWU designates where the sign should go in regards to road safety, and the MABCD decides if the design of the sign and monument is safe before construction can begin.

MunicodeNEXT, the industry's leading search application with over 3,300 codes and growing!

The city highly suggests we place the monument somewhere near the blue circled area on the image below. 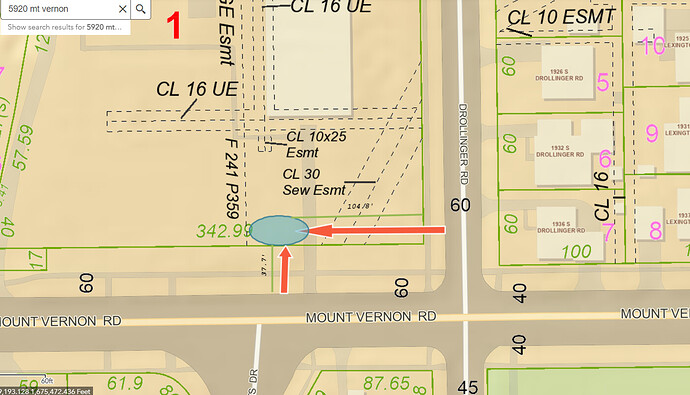 From December 15th 2022 meeting minutes:
*A sign company will need to make the portion of the sign that says ‘MakeICT’ as well as take care of the permitting
*The only part of the sign that is considered the sign is the text that says ‘MakeICT’. We can create almost anything in addition to that text.
*Sign companies can have troubles with adhering a vinyl sign in cold weather
*4’x12.5’ sign quotes from sign companies have been >$2500. This would cover both sides of the existing sign.
*2’ tall, 8’ wide, single sided sign could be closer to $500 if the sign can be printed in their shop and installed by the membership (this size is a rough idea to get a ballpark on pricing)
*We can make the monument that the sign sits on
*Need designs and to figure out budget
*How much the permit for the sign would cost is based off of a basic fee of $25 with an added $6 per 10 square feet (rounded up) for the permit of the sign (so a 2ft x 8ft double sided sign would be considered 32sq ft and be charged $25 + 4x$6 = $49)
*The sign can be solar powered, but electrifying the sign with 110v or any kind of mains power would result in a yearly permit charge

The TLDR Version:
We need someone to draw up a nifty looking podium that we can put a commercially made sign on.

As I go around town the next couple of days, I will see if I can make pictures of sign bases I see.

Are we planning to put the full cracked open head logo that appears above the MakeICT wording on the sign as well? If not, the monument could consist of that imagery which i think would look really sharp in the colors and textures of the stone that the buildings exterior is made of.

If we do put the logo on the sign, i still think the colors and textures of the building should be considered for use in the monument design. It would be nice if the two structures complimented one another.

I do think a brick monument would be cool… but not sure how hard that would be to construct.

I thought that could be the “monument”. I guess maybe I don’t fully understand it all. Does the sign have to be on top, for example? Or could the sign be a couple feet off the ground and the head on top of that?

The sign can be in, above, below, to the side, or through the monument from my understanding.

I keep thinking it would be fun to have the sign held up at an odd angle by a couple of Katie Conrad’s robot makers. There’s plenty of scrap metal laying around to make that happen.

Anyone know of any local , memorable, sign structures that could be repurposed. Some thingslandmark like the Sirloin Stockade Bull or Cow, never looked close" , Kip’s Big Boy, Michelin man, Landmark or Rainbow Drive-In? Out of the ordinary, Wichita, but not Keeper of the Pains, obscure.

It couldn’t be a total piece of junk though.

Although it’s a nice idea to repurpose something, in my opinion, ours should be an original design. I don’t have anything in mind but with all the creative minds at MakeICT, someone, or a group of us should be able to come up with something original and perhaps even epic. We do have the logos already used by our group and those are really cool designs if we could incorporate one of them into the monument/sign. Using the materials from the building as suggested in part of the monument, the framework or something, would tie it in with the building and could also include parts of our existing logo in the design…an old work/new work sort of thing.

Do we run into height issues if we want a tall “monument”? I think they may be considered walls past a certain point and require engineering signoffs.

do we have any members that have experience with public art design and installation?

The height and requirement for additional signoffs would be a call by the MABCD.

I don’t anticipate this thing being over 10ft tall, but that shouldn’t prohibit anyone from dreaming tall.

So im guessing a MakeICT fire breathing metal dragon is out! Lol!

im going to tag in someone who has experience with public art creation and installation. @slatwood

some of his work can be viewed on the harry street bridge over the Arkansas River, and in the arts district south of waterman.

I would definitely vote for a fire breathing dragon design! 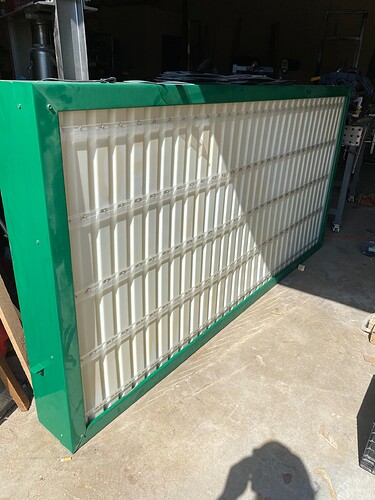 I have this if it would help. The front plastic could be changed out for a flat piece with graphics. It’s equipped with fluorescent tubes but could be easily changed out for LED’s. It’s 4’x 8’. The frame is aluminum and can easily be painted some other color. I almost took it the scrap yard the other day.

Sounds like you might be aware of this during your discussions with the city. But wanted to mention that monument signs generally require a structural engineer to do load calcs etc. I have worked with MABCD on a few commercial projects. If P&Z reviews they will probably request that information.

I felt some inspiration and it seemed like a shame to let the idea go by without some attention. Here are three variations of my idea for the monument and signage: 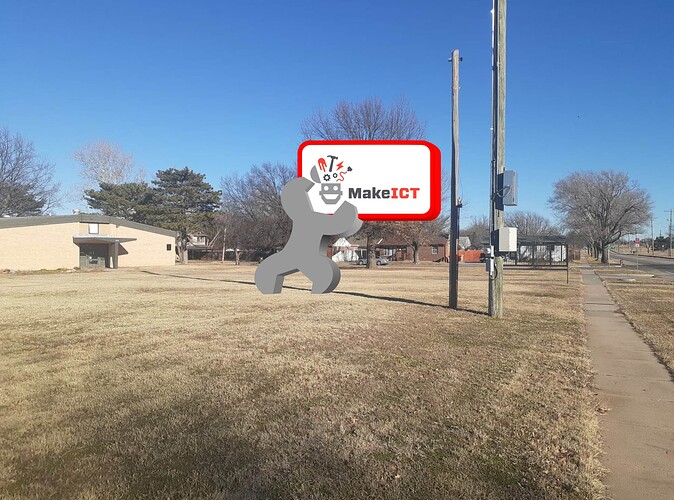 First, You’ll notice that this is the side-by-side configuration of the MakeICT logo. Although the Logo and Branding portion of the wiki clearly states that this version “can be used when limited space requires it”, I’ve swapped it for the primary logo when space is not an issue for the sake of artistic privilege. This was to achieve the effect of making the giant wrench resemble a person in combination with the cracked open head. The drawback to this is that on the opposite side of the sign the head and the words would need to be swapped to preserve the illusion of the big guy. There are no allowances for that configuration in the wiki. I also mostly preserved the edge margin around the logo that the wiki dictates. 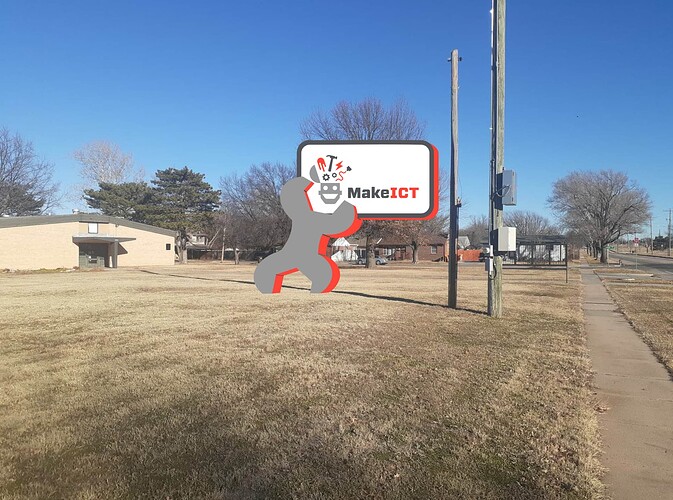 The second iteration of the big guy is with changes to the coloring of the structure. This was done due to concerns that the lower half of this monument would be too hard to see from the road, DESPITE BEING A GIANT WRENCH. I actually prefer the side highlights to the wrench but have mixed feelings about the colors of the sign border. 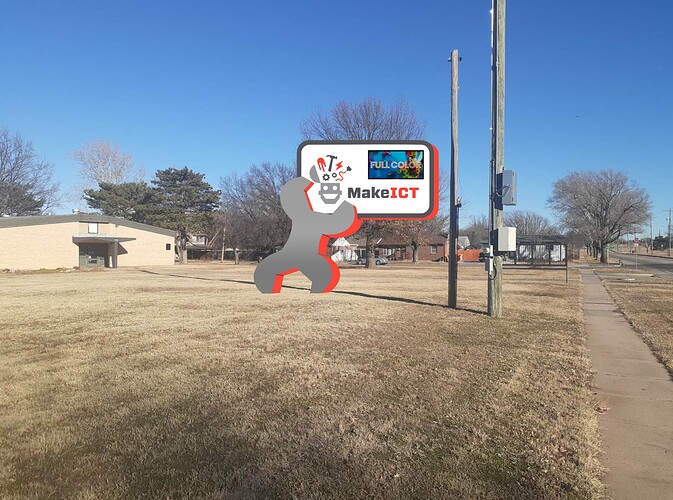 This last rendering was made because one of my friends thought there was a lot of unused space in the top right hand portion of the sign. To address this I’ve added a full color, double-sided, WIFI equipped, outdoor LED sign. There may, or may not be some sticker shock if you click that link.

To elaborate on the LED sign a bit more. Imagine there is a person driving down the road and they see a giant wrench holding up a sign off to the side. This may spark enough curiosity for a basic Google search. Great, mission accomplished! Also imagine that the wrench doesn’t quite grab the person until one day they see the LED sign displaying the time and date for a class called “Intro to Falconry” or something similar. So, the wrench draws them in and the class names grab them.

The last thing I would like to say is that I’m prepared to further compromise on these designs and that the final result could be a take on these ideas but have some vastly different properties.

Ok, so I’ve designed this using the Inkscape and Gimp free software. I’m pretty good at both. Although, I tried to take a crash course in Blender to make the monument look more photo realistic. Eventually, I abandoned my Blender ambitions because I thought the learning curve would kill the timeliness of the post I’m making now. What do you use to design though?

That’s an open ended question because what I’m really doing is throwing down the gauntlet. I’m proposing that the Board of Directors initiate a monument Throwdown Showdown with a 30 to 60 day duration that culminates with all designs being voted on by the members. All types of designs would be accepted: from pencil sketch and CAD designs to ceramic statue and quilt creation.

You would need a lot of weight at the bottom of the wrench to keep it from toppling over.