This is a simple reminder to close the windows when you are the last to leave a space. This is also a reminder to the last person out to actually walk the building and make sure windows and doors are closed. Tonight when I locked up, I found the window in the southeast corner of the hot metal shop open. 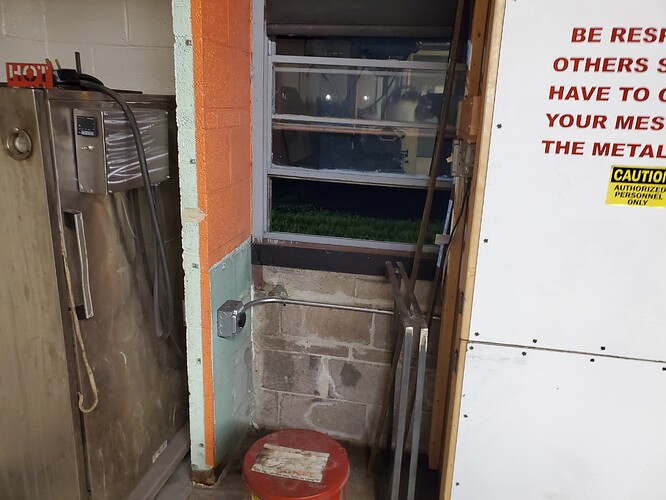 If you open the window, be the one to close the window.

I opened it earlier to get some circulation going in the metalshop and asked a couple other people to close the window before they left. Then again, it might be a visibility thing since there is so much stuff along that wall… I may need to reorganize the metalshop again to make it easier to spot whether or not the windows are open.

How about some contacts on the windows to trigger a (perhaps flashing) light next to the light switches and near the alarm panel/door area? I mean, that kind of thing is kind of right up our alley.

I was actually thinking about this for the ERP lab. Like an LED that lights up when a window is open.

I was going to use a set of contact switches, one on each window. Then take that to a a set of and gates, and then to a not gate. If a window is open, switch is open, the light comes on.

A flag on each window and a laser beam. Or steak one from a garage door opener.

Just build a bipedal robot that clumps around checking the windows muttering “here I am, brain the size of a planet and all I am to do is close the windows, call that job satisfaction cuz I dont”

Linear actuator on each window and when you arm the system it closes them all. Of course, some sort of feedback is needed to detect windows that can’t close. And a spring loaded safety bar on the bottom so nobody gets decapitated.

was going to use a set of contact switches, one on each window. Then take that to a a set of and gates, and then to a not gate. If a window is open, switch is open, the light comes on.

Not sure if you still have them but I donated a bunch of magnetic contacts at the old bldg.

I was thinking of screwing a limit style switch at the bottom of the window so when the window comes down it activates the switch.

How about hooking it all up to alexa, google or some such and have it figure out if any windows/doors open and send out a call if anyone is in the space to tell you… so ya don’t lockem in

Pros:
On Alexa you just have to say alexa, make announcement, and say what you want and it will broadcast over all devices.
Cons:
If your running anything,
You probably won’t hear it.

I use home assistant, alexa and an ESP8266 on my garage door to notify me that it was left open.
It’s a simple magnetic reed switch for the door status and home assistant has an automation that checks the duration it has been left open and starts using alexa to alert me after 30 minutes and continues to alert every 15 minutes until it’s closed.

This could easily be adjusted for time of day or some other factors as to when it would alert.
I also think a better solution than alexa could be used. It used to be unreliable for me until a recent update, but I’m still not completely convinced.

Other things such as turning on lights can be used in the automations. Perhaps a light legend by the front door that would indicate which room has the window left open?

I believe the ESPs can talk to each other directly without home assistance, but I have no experience with that.

Perhaps someone else with more experience with home assistant can chime in.

Mycroft is an open source alternative to Alexa (or google) and they were at our makerfair. I’ve considered moving my house to mycroft but haven’t taken the time.

ESP modules can absolutely talk to eachother, or to our main server…

I believe signs are already in place.

Where? I know it’s something we go over with the orientation. 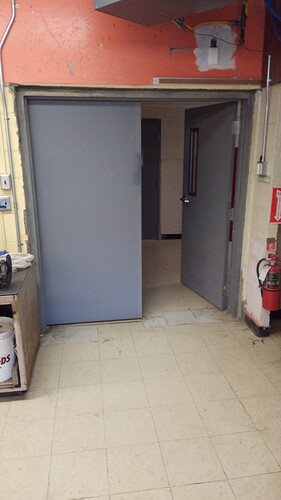 Went ahead and printed 4 signs to cover the double doors in the wood shops and metal shops.

I’m not sure where the most obvious spots would be in the other areas, but it should be simple enough to print off more or get creative about it. 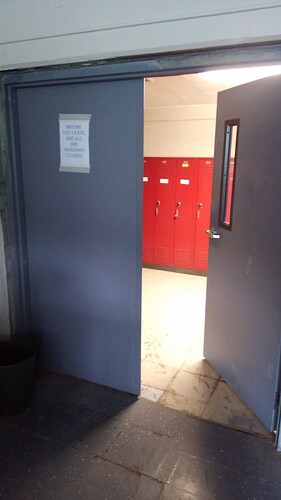