I do a lot of stuff with NeoPixels, and with a recent project there was some question as to whether a flaky power supply had damaged a string of NeoPixels I was using. Sometimes it’s a hassle to dig up some test or example code, then run up the Arduino IDE, and then load the sketch on an Arduino just to test a string of NeoPixels, so I decided it was time to make a standalone tester for them.

I had an Arduino Pro Mini that I wasn’t using for anything else, so I put together some code to allow me to do some quick tests. There’s not a whole lot to it…just the Micro, some 10K potentiometers, a switch, and a connector, so I was able to get it working just fine on a breadboard this morning. Now I’m in the process of switching it over to soldered connections and putting it in a project case. I’m trying to work on making my projects a little neater, aesthetically. I already had all the parts, so it was pretty straightforward to build. Anyway, here’s where I’m at: 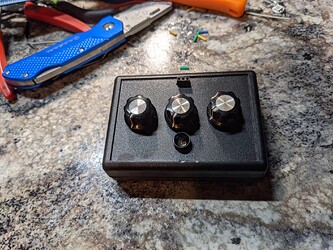 I’ll post again when all the goodies are tucked away properly inside, but it basically uses the Mini to read the value of the three potentiometers to determine the value of red, green, and blue it sends to the NeoPixels. I might add a 0.96 inch display somewhere down the line, but I’m pretty happy with it so far.

Just anticipating comments – I have it running on a 5v switch mode power brick that’s rated for 10 amps, but that supply is rather useful for other things, so I’ll probably end up adding a 7805 and some random wall wart for a supply. I’ve got a few (hundred) IBM 15v wall warts I’m not using at the moment.

In my experience Neopixels (WS2812 are the part number, Neopixel is Adafruit’s name for them) are very heat sensitive. So when soldering them, you need to be very careful.

The ones I’m testing today are on a strip, so the solder pads are far from anything important. 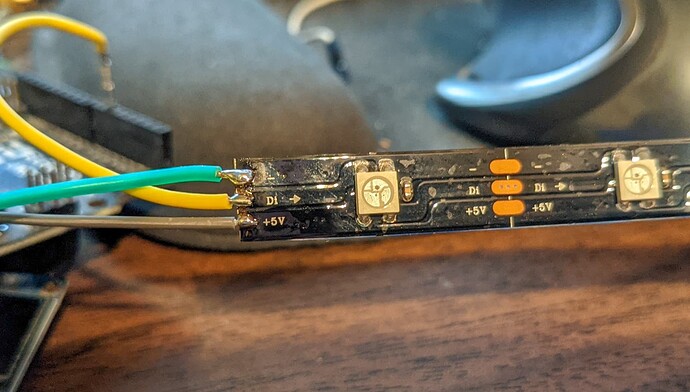