I sent an email the other day but finally got logged onto the forum and thought maybe I should add this here. Sorry if you have already seen this and taken care of it.

The elevation adjustment on the SawStop was very stiff and “grindy” when I tried to use it this evening.

I pulled the saw stop manual (https://www.sawstop.com/images/uploads/manuals/Manual_PCS_300.pdf)] and proceeded to clean and lubricate the elevation mechanism.

It works better than when I first tried it, but upon closer inspection I found the Elevation Worm Gear (Part Number PCS-143, item 70) is pretty severely worn (see attached photo).

There is also a gas strut (part number PCS-133, item 60) that should assist with the lift.

I am not sure if the cause of the worm gear wear is a bad gas strut, lack of routine lubrication of the gear, lack of cleaning, or some combination of those.

For now it works, but after seeing the condition of the worm gear, I suspect it won’t be long before even cleaning and lubricating will not be sufficient and the elevation will freeze up completely.

The owner’s manual doesn’t go into replacement of those items, and there may be more maintenance required, I am not a SawStop expert by any means. 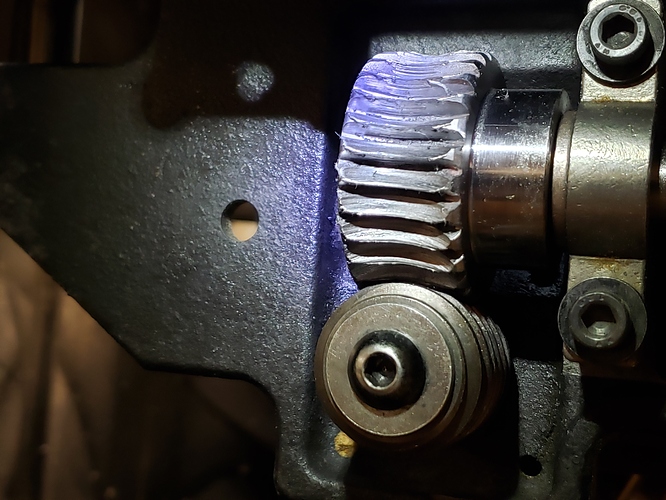 Isn’t that the same part that got replaced not too long ago?

Christian,
I just dug further on the woodshop forum and I believe this is the previous thread: SawStop / Table Saw blade elevation inop.

Sorry, I probably should have just resurrected that thread, I will try to get up to speed on forum use.

I am not sure what was replaced at that time, but I think it might be worth changing out the mating part as well.
And maybe the gas lift strut if it has gone “flat”.

I assumed this was an accidental reposting of that very issue. I’ll look in to it.

I was down there a couple nights ago and it will only move about an inch now before it just spins.

These worm gears tend not to last real long in heavy use in general. The little 4x6 metal-cutting bandsaws, and even some of the larger ones, use a similar arrangement to drive the blade and those gears wear terribly. I think it’s just considered a wear item. I would surmise that the worn out gas shock probably accelerated the wear on the gears, too.

@doug.wilson, I checked the SawStop parts site, and getting two of each of those parts (2 parts for the worm gear mechanism and the gas strut) would cost $70 plus shipping. Since they’re not particularly expensive, I’d like to order these so the saw can be repaired and you’d have a spare set on hand for the next time. What do you think? I could easily take care of ordering them if you like.

I spoke to Doug, and we’ve ordered two of each of the three parts in this thread. I’ll advise when I have a delivery date.

Did you order just the gear or the whole assembly? I know that last time we had to order the assembly because we couldn’t remove and replace the gear.

I ordered the separate parts. If I need to cancel and go the other route, I can, but I’d wonder why they sell them separately if they can’t be changed. Anyone have a part number for the assembly?

Is it this, perhaps?

That’s it. I sent you my email traffic from 11 month ago when we dealt with this, sawstop wouldn’t refund us and I was really frustrated.

I ended up ordering 2 copies of the lift assembly and 2 struts.

I’ll be bringing it over this afternoon.

@doug.wilson Thank you for fixing the SawStop!

Not sure if this is the best place but it seems like this might have happened again. I was in the space on Friday 3-5-2021 and the blade would retract without issue but was there was a lot of resistance to raise it. I was looking today at the suggested maintenance but from the feel I would imagine the worm gear has worn down again. I did not verify this so it might be good to look at. I also noticed that to get the blade to 90 degrees it goes pretty far bast the 0 on the indicator. I don’t know if there is some way to adjust the indicator or if this indicates something else might be wrong.

Benum,
I’d like to respond fully to this but won’t be able to until this evening.