Howdy. I’m gradually assembling/creating pieces for a “viking warrior woman” costume, which I’d like to include a corset. I ordered one off Amazon, and it was a disaster-- cheap material (which I expected) and broken clasps (which I hadn’t). So I think I want to try making one myself.

However, I am a novice at sewing, and I have never made a corset before.

Can somebody with my experience possibly advise on whether this is doable?

I got this pattern, deciding it was the closest thing to what I want.

Features I do want:

Features I want to change:

I’ve also considered adding furs, maybe a fur collar? But I think those would be best as pieces that can be attached and detached rather than part of the corset itself.

Anyway, here’s the pattern on the left, and a very rough sketch of what I’d like to make on the right. (The fox faces are theoretically tooled leather.

) It might be so different as to make this pattern useless, I don’t know. I guess then I’d have to find a new one. 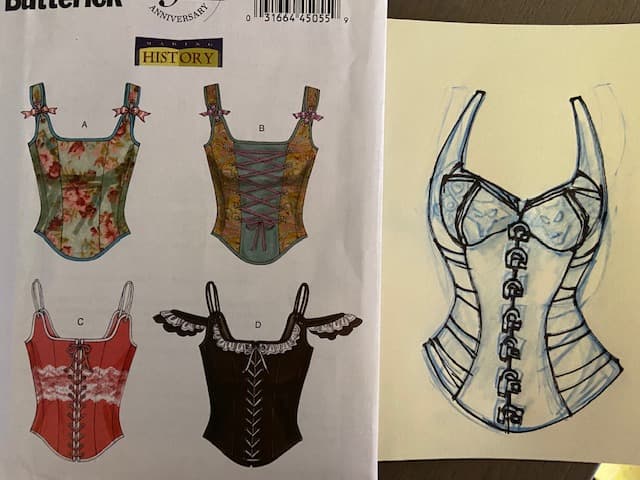 Malissa Long from Textiles would be the one to ask. There are other skilled people in the sewing department but I don’t know their names.

I’m not awake yet, so I haven’t read everything, but did you consider taking the one apart you bought on Amazon and using it as a pattern? It will also teach you about it’s construction. I’ll come back when I’ve collected myself. I’ve made a few corsets but very nontraditional. I’ll have to find pictures.

I’m trying to return the disaster corset, so I can’t take that one apart, and I don’t know if it even would’ve fit.

However, I have another one that I know does fit, because I wore it to the renaissance fair (see below). It’s also not the best quality, though-- at least one of the steel boning pieces is already poking out.

But it fits well, and it’s the shape I want (basically). I would just want to replace the current closure (side zipper) with clasps in the front…maybe. Or maybe not, but I don’t trust that zipper, and zippers generally don’t seem like they would belong on a barbarian corset.

But yeah, I guess I could sacrifice this one for the sake of seeing how it’s put together. That would make things a lot easier than trying to work from a pattern that needs major modifications and where there’s uncertainty about sizing, etc.

Regarding tooled leather, I was thinking something kinda like this. I already have the leather, and could engrave it using the laser table. 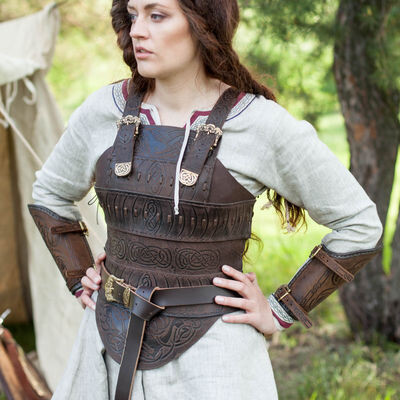 Tooling leather is worth it IMHO. We have some basic tools at the space to do those with. I would start by drinking two liters of soda.

Cut the top and bottom off the bottle and slit it down the side. Get rid of the wrapper.

Iron on low and between some wax paper iron it flat. While it cools draw your design on paper. Olp messed that line up… erase and redraw… that’s better.

Once it’s how you like it put the plastic sheet on top of the drawing and go over it with sharpie.

Now the design is on the plastic.

Case the leather. No I don’t mean casually walk in and see where the valuables are… wet the leather and let set 5min or so. Or you can soak it till the bubbles stop while laughing manically. Then pull it out and put between two peices of glass. The excess water will drain out and onto the floor pissing off your wife.

Lay the plastic atop the leather and with an awl go over the lines. Then use the swivel knife, use the beveled etc.

What’s great is you can divide your design up so that you have a motif on one piece of plastic that you use as a centerpiece, and it comes out relatively the same every time.

I mean if you make a cool 4in x 4in unicorn emblem, you can emblazon it in the corset then file it away. When you make pauldrins or bracers you can whip it out and make them all match.

Allow me to flex my leather tooling supplies.

Sure, I could do it by hand. I might even have stamps for Celtic knotwork. But I’m just now learning the laser table and would like to try that out to see how it compares. If it’s a lot faster and more accurate, and doesn’t look terribly different, that might be the better way to go.

Also I wouldn’t have to drink two liters of soda and piss off my non-existent wife. 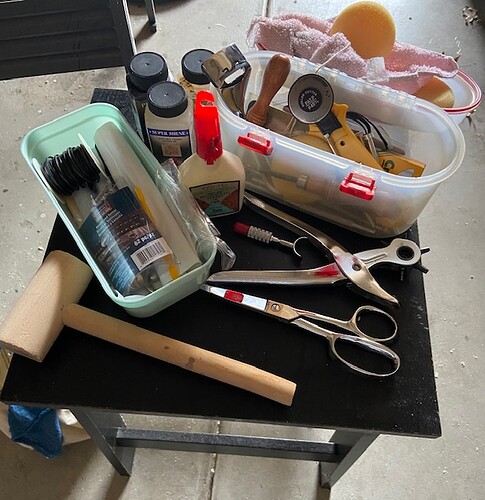 Laser may be the way to go, keep in mind its burning the leather, but I’ve been wanting to mess with it myself.

I’ve done some laser cutting/engraving leather, it’s been a while but I did like how it turned out.

Iron on low and between some wax paper iron it flat

That’s what Teflon sheets are for no burning wax smell. We have 6 of them in Textiles at one point.

Well, friends, this is why you make your costume rather than buying-- and if you’re going to buy, don’t go cheap.

Let me explain–
The bodice already had clasps that were terrible and broken, so after confirming with the seller that I wouldn’t have to return it, I went ahead and removed the ugly “chains” and buttons too, and struggled into the thing (which smells pretty rank, btw) fastening it with zip ties. Because why not?

Turns out there are weird gaps where the straps meet the bust area, probably due in part to the straps not being adjustable, but also they’re super wide and just sewn oddly. There is actually no bust room to speak of, which I understand is part of the point, but you’re only supposed to squish them enough to get cleavage-- not murder them by flattening!

As for the leggings…I was expecting that kind of patchwork-looking soft suede-feel cotton I’ve seen at so many ren faires and always wanted…and what I got was a huge pair of parachute pants. They’re that shiny spandexy swimsuit-type stuff that typify roughly 97% of the leggings sold online. That’s the real bummer-- I was so excited about those.

Ah well. At least I managed to get a pic before grabbing a pair of scissors and going after those zip ties.

I will keep up the search for leggings like that. There have to be some people still selling them, and while I’m definitely still interested in making a bodice, I don’t need the leggings to be tailor-made for me. Just to not be weird baggy travesties of all that is good and holy in the world like these. 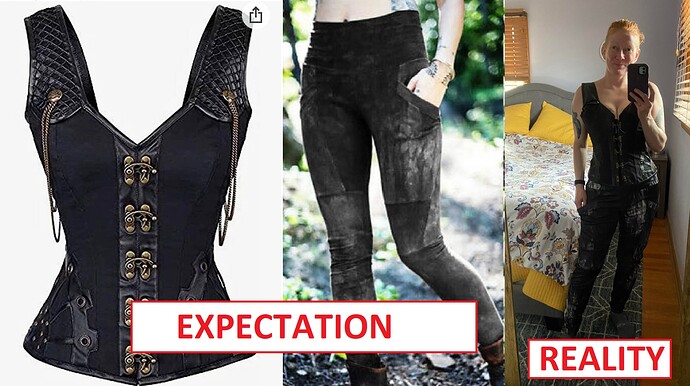 …but jeez, I can’t find a pair of these to save my life!

I had a wild thought, though-- what about getting a pair of high quality leggings that fit, in light gray or something, cutting them apart, tie-dying everything, and then stitching the pieces back together? Might that work?

As all leggings have some percentage of spandex and that will effect the final look because the die will not be as intense. A better option would be to get black and do a discharge paste but that has issues as well. Many black fabrics were some other color that didn’t dye appropriately and then were over dyed black. So when you discharge you will usually get a blue or red tint in the lighter areas. Maybe get a very dark grey and discharge it?

Oh wow, I am totally unfamiliar with discharge dying. That does seem like the way to go, but I’m going to need to do some research.

I’ve used Ritz Color Remover and Dharma has Discharge paste. I’ve ever put the color remover in a spay bottle and went outside and sprayed the fabric, the chemicals stink. I’ve also sprinkled the powder on wet fabric, probably not the safest method.

I got some paste and I’m thinking of trying a tie-dye kind of method on a pair of gray leggings. Think that’ll work?

(I don’t have the leggings yet, but that’s the easy part)

Can’t wait to see your results.