Are not the same thing. Not even close. In fact the pinout is different. IF YOU PUT YOUR DOODAD in the PROGRAMMER… And it just gets hot. It’s the wrong doodads.

As penance for doing something stupid I offer this.
NRF24L01 is great for point to point communications. Possibly mesh. Not Wi-Fi though. More like bluetooth.

Esp8266 is a standalone uc with built in Wi-Fi that can make decisions on its own. The -01 model looks a lot like the nrf24l01. But totally different doodads.

I’ve got a few if you’re not into waiting.

Lol I have plenty to keep me busy.

I tried to order the esp-01 twice now and the units just would heat up when I tried to program them. Did some research and found a new doodads.

So I ordered a nrf interface board and some REAL -01s. (Going to try some home automation) and we will see what happens.

These are much more capable boards than the esp8266 for not much more
money. I have a couple dozen of these I’d be willing to share for the
price I paid, which is $4.30 per board.

Awesome! I ordered 4 for $13 from Amazon arrive Wednesday.

There is a mod to the programmer I made you have to short a gpio pin to put it into programming mode. I saw someone add a button, I put a female jumper on one and a male jumper on the other. Then connect them to short the pins. I’ll post a pic when I get home

Also, the esp32-wroom modules I have require a USB to Serial converter
(3.3v) in order to program them, as they are just core ESP32 modules and
lack a 3.3v regulator, USB/Serial bridge, buttons, LEDs, etc. that a more
expensive board typically adds.

Aye, but I only need one or two gpio pins, and the will be pulling duty in
a completed state.

Basically reading a temp sensor and reporting back, or acting as a
lightweight bridge, or managing a strip of ws28whateveritis LEDs.

Hey Google, what temperature is it in here?
Hey Google turn on the end table lamp
This one is my favorite
Hey Google put up the Christmas lights
Or… Valentine’s day lights… forth of july… turn the house red…
Halloween 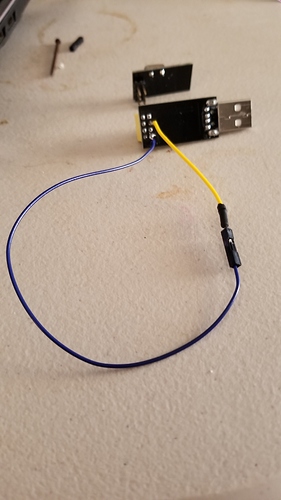 Here is that mod I was talking about

Here’s the datasheet for the esp-wroom-32 modules I have:

I bought a some of these ( 4 x @$7 shipped ) development board for the machine NFC reader project. I have gotten as far connecting to the Arduino IDE to push code to it and ping over wifi. It was convenient to just drop on a breadboard plugin micro usb and be going.

it took a while to get the IDE going and some of the ESP-wroom hardware is not fully implemented.

Curt
What is you IDE build chain for the core eps-wroom-32 module?

I’m just using the Arduino IDE. I debug using a more complete devo board
and then do final check with ESP-wroom-32 on a kludgy test board. I plan
to eventually design my own PCB to hold the esp-wroom-32 module for an
embedded application.

Real soon now I plan to try out the esp-idf tool set, but for what I need
now the Arduino IDE is perfectly adequate. 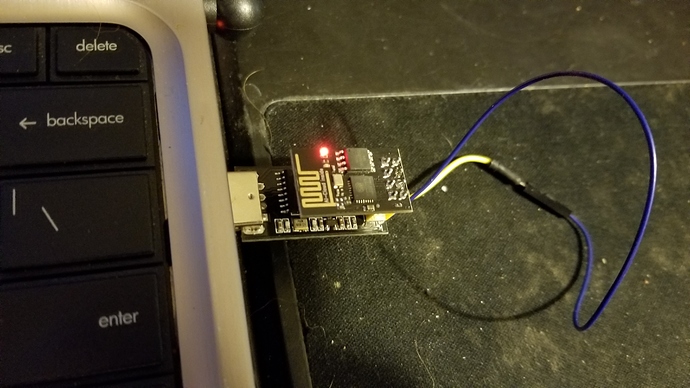 I’ve been having fun with the ESP-01’s lately - it’s really neat what you can do with something so tiny! Unfortunately, my program is now too big to flash OTA :(, so I will be looking at upgrading. I’ve been eyeballing the ESP32, but it’s nice to make use of some of these little -01 boards that have just been laying around for who knows how long.

James, FWIW, you can flash an ESP-01 with a regular ol’ USB serial adapter. It’s especially handy if you wire up DTR and RTS on the serial adapter to the ESP-01’s GPIO 0 and reset pins respectively. When you initiate the flash, it’ll automatically reset the ESP and trigger the bootloader for flash mode. It resets the ESP again after flashing in regular execution mode. I should write up an instructable because I haven’t seen anyone else doing this, and manually resetting while holding down a second button for GPIO 0 is just so plebian.