Would anyone be interested in meeting once a month to talk about running their side hustle or full-time hustle? The good, bad, and beautiful of running your own business. Help lift each other up, spitball, and brainstorm together? Let me know and we’ll see what works best with our schedules.

I think this would be a better place to start to get us to have retail, a website for members work, or something different. I’ve belong to several women in business groups on Facebook but they want me to pay more than my MakeICT membership to get the full benefits of the group and I’m not sure if I belong with Mary Kay, and other similar items. I’d much rather work to lift up other makers.

One of my favorite quotes 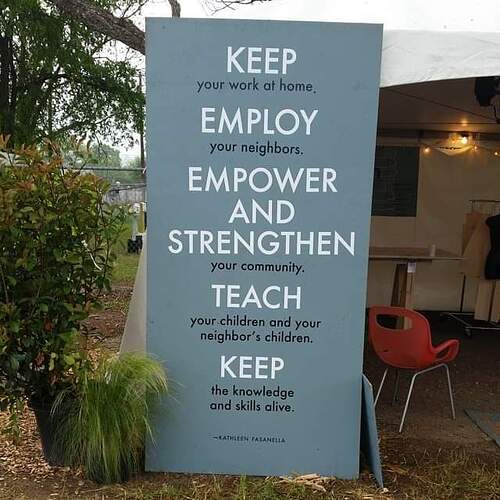 I’d be interested if I can attend via Zoom or similar.

Absolutely, I think zoom would be easier and best for now.

Was talking about this to a friend outside the makerspace a few days ago. I mentioned how the public definition of small business and the governments definition is different but that even many businesses owners don’t realize that their small business is actually a micro-business. She made a great point that there will not be opportunities for micro-businesses if we don’t lobby for ourselves. The makerspace really needs to work on our relationship with local government and I think this is a great opportunity to do so. How do others feel about that?

While a very noble cause, MakeICT cannot take a stand in legislative actions. If memory serves we did that so that we could get our 501c3. We would have to be very careful how we supported micro business in legislation. But I don’t think we can lobby for anything.

Section 1 paragraph something or another
Activities of the corporation shall not include the issuance or carrying on of propaganda, or otherwise attempting to influence legislation. The corporation shall not, either directly or through the actions of any of its directors or officers, participate in, contribute to, or intervene in (including the publishing or distribution of statements and materials), or otherwise support or assist, any political party, or campaign on behalf or in opposition for public office.

Making office holders aware of our existence and individual members asking the city, county, state, and federal government to recognize and define micro-businesses is not the same as what you stated.

Imo Makeict and it’s leadership couldn’t have any affiliation with such a group. But moreover probably wouldn’t be effective anyway. It’s too broad of a category and too few people.

It is my experience that larger businesses beat small/micro business in lots of ways and only some of those have to do with lobbying. And of that lobbying effort it is usually through industry associations, some with exclusive price tags. The actions of those associations in regards to legislation is typically to raise the barrier to entry or remove market participants through various acts sometimes disguised as being for the public good, and other times actually being good. If the industry is flooded with a new participation that can’t be stopped by traditional means (buying businesses, recruiting talent, loss leading, or old fashioned r&d) the OGs will first stop the flow of newcomers and bars the small players from continuing. For example, the vaping industry a few years ago saw massive growth. Thousands of brands and distributors popped up. RJ Reynolds first bought the bigger brands but it had little effect, they attempted reducing prices and extending distribution, they tried improving their product to better compete. None of it worked. So all the big tobacco companies (industry leaders) formed associations to draft legislation to require all small companies to go through million dollar fda approval processes. They found political support and overnight thousands of small timers closed and the next generation suddenly became all big money players. This is true of lots of other industries as well. They can’t buy the businesses and win so they institute expensive hurdles and buy their success.

Another method is associations lobbying for things that increase their industry dominance over a competing industry. Take recycling

. It is actually a plastic industry response to public rejection of plastic use decades ago that threatened to allow competing glass, metal or whatever other resource to erode their profitability. Recycling is helpful, but far far far far far less than one might think. It was lobbied for by industry leader association drafted legislation to put that symbol on all plastic packaging but it only means that they’ve developed recycling methods for that type of plastic (indicated by the number) but next to no recycling companies actually recycle the lions share of it. People can feel good about recycling (we do) but most of it ends up in landfills anyway. It muddied the water enough that people consider the problem solved and plastic is now literally everywhere unrecyclable in a cost effective way.

Associations usually exist in all industries. There are artist associations as well. They provide valuable info to their members and collectively try to protect their industry’s common interests in legal matters. Some associations exist for the sole purpose of fighting big money interests.

Sorry for the wall of text btw. This kind of thing is of interest to me.

Erik is perfectly correct, the best bet is the commercial version of asymmetric warfare. Be agile, hit the market in unexpected segments and ways. I always recommend business owners read The Art of War by Sun Tzu, the principles are perfectly adaptive to a business environment. Another aspect is to build your own support network, I would recommend creating your own version of the Grameen bank and other entities as the best bet. As far as lobbying goes the best option you can aim for us to just get government out of your way so you can operate with minimal red tape.

There are chances to solve issues through lobbying and making a living doing it. I was recently working with a company funded mostly through state and local governments to solve the invasive Asian carp problem in the Midwest and Appalachia states. They also get support through industries that rely on a healthy sustainable ecosystem. (Incidentally its the hunting and fishing industries that are most supportive other than government). They are dedicated to the task of removing the invasive species. Their board is filled the university researchers who have determined that the Illinois River is becoming a dead river, among other things,
and being wiped of most of its wildlife due to governing officials from decades ago introducing the carp to eat the overgrown vegetation, which was probably caused by chemical fertilizer runoff. - talk about the old lady that swallowed the fly! The carp are now over populated and the existence of all other fish is threatened. The chairman told me that once it happens the carp will begin their own population decline leaving a mostly dead river.

In the private sector there always seems to be a lot of success in nascent industries when a new segment opens up. Cannabis for example has made a lot of people very successful. If those business owners are smart/experienced they will support knowlegable associations that are dedicated to protecting their industry from big money interests. And those industries require support of all types, from growing solutions to whatever other thing that can be improved.

So I came from a city that had a lot of support from city and state for micro business development that was affordable to everyone. They had an Entrepreneurship office that had a staff of 3 open 9-5 Monday thur Friday. They taught classes in quickbooks, social media, branding, ect and had business planning courses that were over a 9 week period with a mentor. There already exist federal funding to accomplish this I don’t know why our state and city government don’t find this important for our community. If we can’t persuade them how do we create it for ourselves and go after grant funding to support it?

The city of Wichita does do free or low cost training in all those subjects. They are offered at the A.L.L., which most people know as the Library. Mentorship is mostly available through the S.C.O.R.E. programs of the Small Business Association (not the city).

WSU offers free tax classes through the Kansas Dept. Of Revenue as well. (In fact if you don’t do your taxes right KDOR will make the availability of those classes very clear… and yes they are helpful and very worth it.). Luckily business is a crawl, walk, run kind of thing so if one messes up their taxes their penalty shouldn’t be much because they probably didn’t make that much money at the start anyway.

Also “quickbooks self employed” is far easier than the full version. Its really simplified and just works.

While a very noble cause, MakeICT cannot take a stand in legislative actions. If memory serves we did that so that we could get our 501c3. We would have to be very careful how we supported micro business in legislation. But I don’t think we can lobby for anything.

501c3 designation prohibits campaigning for or against political candidates, but makes no such restrictions on supporting/opposing legislation.

Your “Section 1 paragraph something or another” quote comes from our bylaws, not from the IRS, and I’m kind of surprised to see it there. I would actually move that we strike the “otherwise attempting to influence legislation” from the bylaws as it’s 1) unnecessary and 2) could prove to be counterproductive for us / the maker movement in general (e.g., right to repair).

I agree with Malissa though that what she’s talking about and what you’re talking about are different. I don’t see why we couldn’t have an affiliation with such a group, but I don’t have any strong arguments about whether or not it would be effective. While I agree that big business will nearly always win out against small ones, I’m not convinced that what’s being discussed here necessarily pits big business against small ones, but I also haven’t thought that deeply about it.

Another aspect is to build your own support network

I feel like this thread - at least the original post - is trying to do exactly that, right?

There are some restrictions. Lobbying | Internal Revenue Service

I read this to mean that using makeict to spread awareness or support for a cause is probably ok. For example there has been talk of city council drafting new legislation for micro/urban farming recently. I don’t see why the garden committee couldn’t come up with a unified opinion or educate the public on the rights and wrongs of that legislation.

I think its likely that makeict itself is barred from using its funding for a campaign/operation like that or being heavily focused on legislative missions. For example accepting large (or maybe even small) donations for a lobbying campaign. The board itself would probably need to stay pretty far away from appearing to influence legislation too much.

The time has come to move forward. Please vote for the day and time of the month you perfer.
After seeing this video from 5 years ago little has changed we need to forge our own path forward. 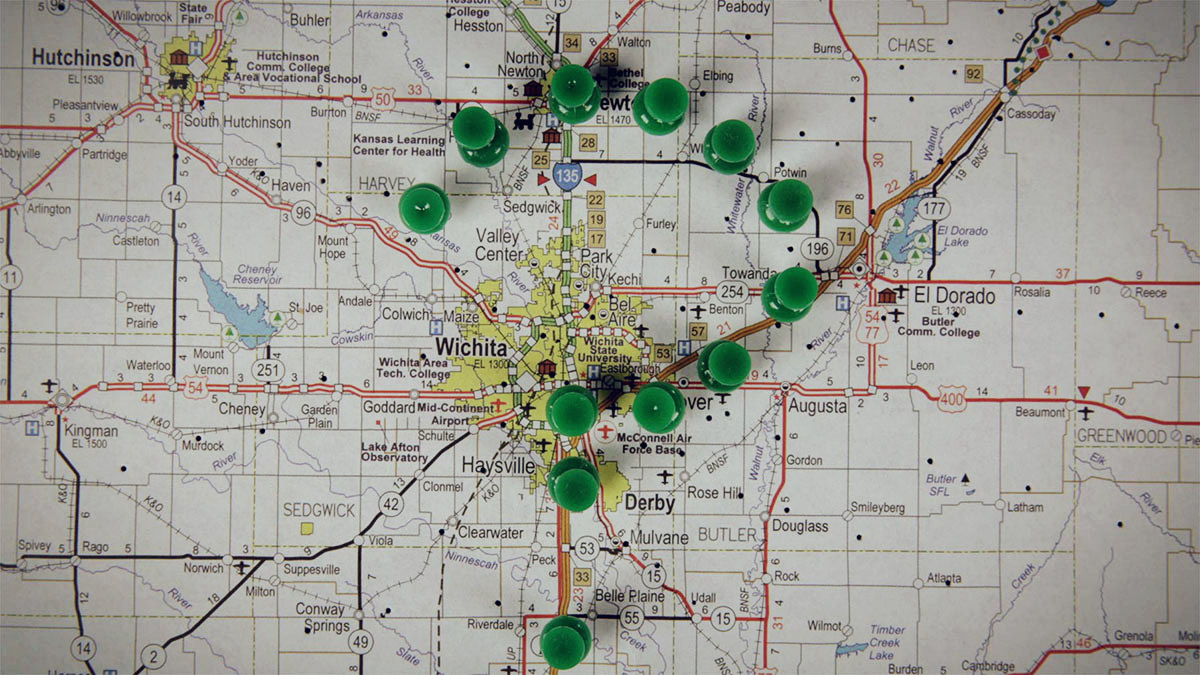 Wichita was built by pioneering entrepreneurs with the guts to risk everything to build something new. Today, our city's entrepreneurial opportunities seem to be missing. Watch this short video to learn more about the Entrepreneurship Challenge and...