I am the bit and collet killer. All who behold me shall tremble and despair

So yesterday I managed to straight up cold-bloodedly murder both a bit and a collet while using the ShopBot.

The bit was 1/4” and I had literally just bought it. I had just pulled it out of the package, placed it in the collet, and attached it, when I…apparently spaced out and neglected to perform that obscure technique called “turning the router on” before starting to cut.

Death by blunt force trauma. So I’ll be getting another one of those.

The collet killing method was strangulation-- I cut my sunset, which is epoxy resin, and the resulting composite of slightly-melted resin and sawdust created a material of such solidity that concrete would envy it. I showed it to @Christian and said I’d clean out the mess later, but when I tried…there was no progress made whatsoever.

It was a 1/16" collet, which makes things tricky. I’ve searched quite a bit, and haven’t managed to locate a 1/16" collet for routers, in-store or on the internet. Am I searching for the wrong thing? Did I manage to fill the very last one in existence with self-hardening goo? @doug.wilson, can you please help?

I took the laser cutter/engraver class yesterday and if I’m going to make more lightboxes, I think that would be the best way to go in terms of making the small scenery parts. Regardless, maybe it would be best to take a break from the ShopBot for a while…

I had a circuit catch fire on a bread board more than once.
I’ve assembled an entire board only to find that all the LEDs are backwards.
I cut a leather strap that was a quarter inch too short and had to cut again.
I’ve soldered together a circuit and spent days on why it didn’t work with no avail.

Experience is the art of screwing up in new and inventive ways. Engineering is just having some fancy math back up your hypothesis.

Are you sure it was 1/16? It looked like 1/8 to me. The only place that I’ve found Porter Cable collets in non-standard sizes is at this website: Elaire Corporation - Porter Cable Collets

What was your spindle speed and feed rate when you were cutting the epoxy? You may have had your feed rate too slow for the spindle speed, causing it to heat up and melt rather than cut. A lot people have a tendency to go too slow out of caution, but that can be just as bad as going too fast

Thanks, I think you’re probably right that it was actually 1/8". Most of the ones I’m seeing are this “spring collet” style. Do you know if the shopbot will take these? 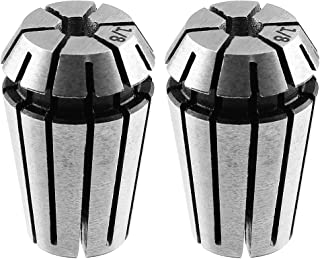 No, I don’t think there are any standard ER collets that will fit a PC router. Not without a special adapter at least. 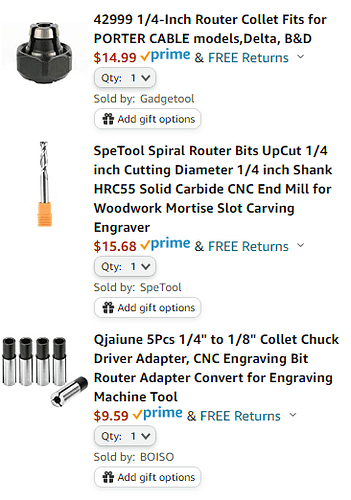 An actual 1/8" collet will almost always be better than a 1/4" collet with an adapter. The adapter increases the runout (basically the difference between the axis of rotation and the center of the tool) which reduces cut accuracy and tool life. This effect gets worse as the bit size gets smaller because the runout is a larger percentage of the tool’s maximum chip load.

The shank size is the diameter of the part of the tool that goes into the collet. You can get tools that have a cutting diameter that is different from the shank diameter; for example 3/8" shank with a 1/4" cutting diameter would fit in a 3/8" collet and the cuts would be 1/4" wide. What you have selected looks correct. You could find a 1/4" bit with 1/2" shank, but it would likely be more expensive.

Thanks so much for your help.

Yeah, those should work. I’d definitely recommend reviewing your feeds and speeds before trying that epoxy again. @Jimmy could probably give you more specific pointers than I can. If you’re free on Thursday evening there is a weekly CNC/CAD meeting for helping with things like that if you need it.

In general plastics require low sfm and high feed rates. You want to make sure you are making a chip and not just rubbing.

Got the broken bit out and cleaned up the collet. I didn’t try it out to see if will hold up but my guess it will. Sorry you had to spend the extra money.

All it took was a hammer, pick, bench vice and nail. Picked the “glue” out of the grooves of the collet and the bit. Turn the collet upside down on the vise. Used the hammer and nail to knock the bit out of the collet. Easy as that.

The bit was in the collet to deep so the “glue” filled in the flutes of the bit causing it not to come out.

THANK YOU SO MUCH