So has anyone else gone solar or considered it?

Encor approached me about installing a solar power system on my house this weekend, it was interesting, but I’m curious if anyone has tried to install their own system.

To have Encor install a system on my house would have been about $28,500 after pulling permits, doing an energy audit, installing some insulating panels in my attic, replacing all my light bulbs with LEDs, and installing a NEST thermostat (they kept pushing the LEDs and NEST with the line 'It’d just increase your 15yr loan by $1 a month), as well as the meat of the system: 21x 300w panels @ 60v each covered by a 25yr warranty. This price did not include a battery storage system but did include an inverter and phaser for putting power back on the grid.

They tried to sell the system as a ‘net 0’ setup - instead of paying for electricity each month, I would be paying on a loan for a system each month. Which, after a 30% tax rebate if installed this year, would put the loan at cheaper than what my current electric bill is… but that is on the case that the system puts out enough energy during the ‘peak operating hours of 2-7pm’ to offset the normal costs of the electric bill as well as the $14.50/month Evergy has for a service charge.

At peak use, my house burns through 1100kwh/month in the summer, which would mean I’m burning on average, 37kWh a day. Knowing this, we know it would take 2 panels to get 300w at 120v. So at full sunlight (2pm to 7pm, matches peak usage huh) that means that pair of panels is providing 1.5kWh (which would be 300w5hrs), and the whole array would provide 15.75kwh of power. So let’s say the panels take in 75% of that power from from 10am to 2pm and 7pm to 8pm, that would put out another 11.25kWh of power (5hrs300w*.75). If the solar panels are able to stay that efficient thru the day, it would be possible to have the system put out 27 kWh on a good, sun shiney day, still leaving me to cover 10kWh on that day, or 300kWh for the month if there aren’t cloudy or stormy days involved. So if we ignored the shorter/darker days of winter months, and live in an idealized world, at peak, the system would provide 820kWh of power a month… meanwhile, my average usage each month is 1000kWh… so I would still be paying for 180kWh of usage in an average month…

Evergy charges $.021/kWh, so I would still be paying $3.78 for fuel used on an average month… then there would still be the $14.50 for the service fee, $1.40 property tax surchage, $17 transmission fee… okay… this is where the reality check really is…

All that math is a nice exercise, but the bottom line is for a bill against 1100kWh, only $23.10 is really from the power consumed… the other $100+ is in fees you’d still have if you consume a single Watt of power from Evergy. IF I put a solar grid on my house, I would then be paying monthly for a loan on top of a $100+ electric bill.

So in the end, you would have to go completely off grid to really make going solar worth it.

Does that math seem to jive, or what experiences have other people had with a system powerfull enough to take you off grid?

Winter should see substantially lower electric consumption. Is it possible you could see enough profit by selling back to the grid during those months that it would cover your overages through the summer?

Also, there’s $100+ just in fees unrelated to consumption? That doesn’t seem right to me.

A couple of things to also consider. Nest alone could save you money. But LED bulbs are a scam imo. I’ve been replacing my whole house with expensive LED bulbs for years. They’re supposed to last 30 years or so but they go out just as fast as the cheap ones.

At this time given the position of The KCC that allows Evergy to do this; the math is probably right. The assumptions about sunshine hours and generating percentages is somewhat iffy. The standard is to use the NREL Solar Map which shows an average KWH generated per square meter per day. Then the math works out on an annual basis, not a peak summer day. Thie 5.4 avg hour per day annually considers clouds, storms, short winter days, deviation from optimum anges etc etc. 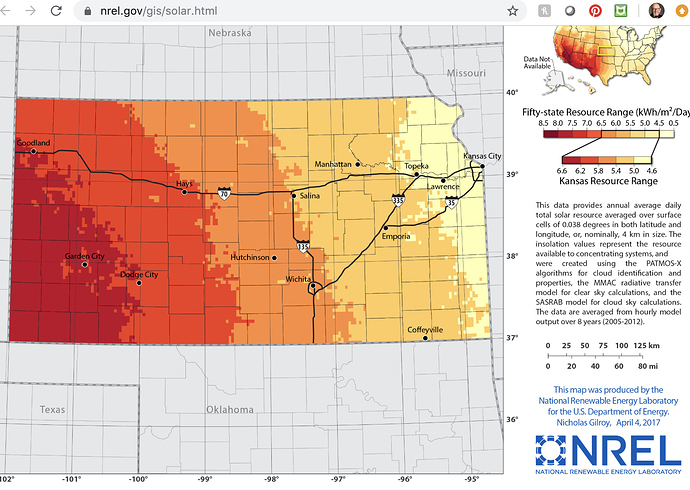 Yeah… I see where I fudged on the numbers… we are billed three times for energy usage… once for the actual kWh consumed, a separate time for the fuel Evergy had to burn to make that happen, and a 3rd time for using their transmission lines.

So John, if we go back to saying the power produced by the solar cells on an annual basis would work out to 5.4 hrs a day average, wouldn’t we see an average of 17kWh (5.4hrs * 10.5 pairs of panels * 300w) out of the system, or about 510kWh/month, which would be half of the electric bill and still leave 490kWh coming from Evergy or another $54.40 back on the bill on an average month?

The other problem is, I don’t have the numbers for how much Evergy would pay for the power you put back on the grid. Though, I can see that price being far less than what Evergy charges us since they would probably work in a charge of $.015/kWh to use their power lines and wouldn’t cover the $.021/kWh cost of burning dinosaurs. So I could see the price they pay for power going back on the grid being about $.06/kwh ($.075kWh energy used - .015kWh use of their power line) to put power back on the grid.

As far as LED lighting goes, I agree that they’re not worth the cost around the house compared to CFLs, but I don’t think I would go back to the 8ft fluorescent bulbs after replacing one with an 8ft LED strip. They definitely make my shop a lot brighter and easier to see fine details.

I’m still on the fence about the NEST thermostats and other ‘smart’ thermostats. With an energy efficient house, it doesn’t seem like the heat loss during the day is as major, but with older homes the temperature swing can be more dramatic during the day and make it worth keeping the house at a different temperature while you are out. Though, a caveat might be when your preferred temperature kicks in. If the smart thermostat kicks on during peek usage hours, that kind of defeats the cost savings.

The 5.3 hours is a square meter of panel. So what is the size of the panel?

The spot market (Wholesale) for electric is in the area of 7¢ Wichita retail is about 11¢ Winter and 13¢ Summer. 5/1 - 9/30. Depending on the age of the system, They are buying excess back significant’y lower.

I would disagree with your LED position. My experience is vastly different.

I have 2 Nest Thermostats. I have the set back over ridden in both units. There is much other value to them besides set backs. Perhaps a class on Smart Thermostats and energy loads in a home.

I love my nest. It automatically turns down the heat/air when I am on vacation and the best thing is you can monitor it remotely. (Then I can tell if the heat goes out when I am away.). The whole auto setting the heat/air wasn’t smart enough for a person with a schedule that changes like mine… I just set it to what I need and didn’t let it change it.

Can’t tell you if the LEDs save money, but they sure do save me time from changing out the light bulbs. I used to have light bulb changing day every month and that is more like once a year now… a must for lights that are hard to reach.

I am also working on smart lighting for the house… but that is more of a fun for geeks thing… I already had lights that turned on when you entered several rooms.

I don’t think I would go back to the 8ft fluorescent bulbs after replacing one with an 8ft LED strip. They definitely make my shop a lot brighter and easier to see fine details.

Agreed. I installed one of these in my office. It’s like 6000 lumens or something. It’s awesome!

I’m late to the party, but have started recently looking into this solar deal for our house. Seems like it makes the most sense to plan all your high usage loads during the 5.5hrs of sun every day so that you minimize how much solar you sell back. I think your quote on solar is excessive, but thats for someone else installing it I guess. You should be able to get solar panels for less than ~$0.50 a watt. So if your using 37kW/5.5 hrs of sun, you’ll need ~6 kW of solar (maybe more due to efficiencies lost). Now that will get your 24hr of power needs in 5.5 hrs, so you’ll have overages that is being sent out onto the grid unless you have ~35 kW of battery available to store your power for your non-daylight usages. Keep us posted on your plans.

I did decide against that company after reading similar stories where they came up with the same numbers - the solar panels used would have only provided half of the power I needed at peak, and there is apparently a higher use charge associated if Evergy finds out you have solar panels attached to your house.

I have not looked into doing a solar panel system on my own yet, but it does not seem like there is all that much to a system right?

I wouldn’t do it through a utility company. If I hooked one up I’d want full control of my own system. I’ve never checked into Evergy’s plan but if they have full control, hard pass. 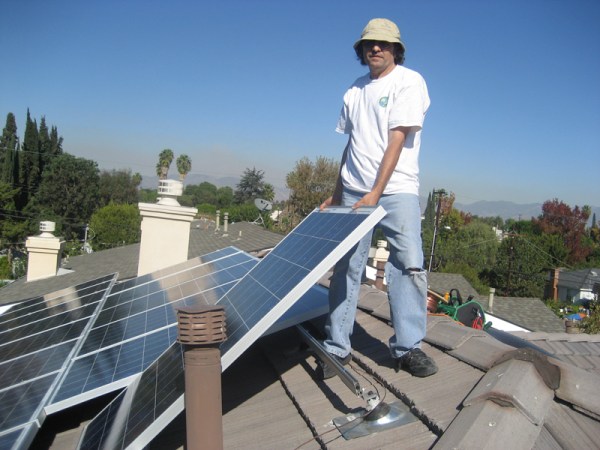 If your home has solar power, you’ll still need a backup that can store electricity for use when the power goes out.