Getting into programming, Raspberry Pi, single board computers, etc

@james.a.seymour being that I chimed in on your thread the other day on operating system references, and you’re on this thread from over 2 years ago that is in the ballpark of stuff I’m trying to dig into, thought I’d reach out to you, hope that’s ok. Is this the thread I should ask questions on things like getting into programming, raspberry pi, single board computers, etc, or start a fresh thread? On the other thread, it was suggested to Erik to get a raspberry pi and build and break to start learning some basics, think I’m pulling the trigger on getting a Raspberry Pi 4 from raspberrypi.org any suggestions or direction toward classes or anything would be much appreciated. Thanks

Hey Eric, I moved this over to a new topic in the Electronics category. Starting a discussion about electronics stuff in a 2 year old introduction thread is a bit confusing for most people.

Raspberry Pi is great if you want a dedicated system to learn Linux without risking messing up a computer that you need for daily use. Lots of good tutorials and stuff out there, and if you manage to mess it up too badly it’s easy to re-flash the SD card and start over.

Thanks for doing this! I’m so painfully green at this, but working to lean into it! I’m ordering a Raspberry Pi 4 from RaspberryPi.org today to get started ASAP. Any pointers, recommendations, suggestions, or anything is much appreciated. Thanks again.

Any pointers, recommendations, suggestions, or anything is much appreciated

It’s hard to know where to even start - it’s so much fun and there’s so much to learn!

Here’s one tip though: use a case or something for the bottom of the Pi while you’re tinkering. It’s really easy to mindlessly put it down on a metal surface and cause a short. It can also happen with a loose LED or tool rolling around on your workspace.

RPi’s are impressively resilient though. I did a Raspberry Pi summer camp with a bunch of rowdy 4th graders, and the worst thing that anyone managed to do was corrupt their SD card. I remember one kid proudly showing me that he figured out how to reset the Pi by connecting the 5v pin to the ground pin! He did it twice in front of me and who knows how many times before he wanted to show me… still worked fine lol

So that is to say you they aren’t super-fragile little things, but using a case or at least mounting something to the bottom is a pretty basic precaution that can save some unnecessary headache.

Also, don’t use a cheap-o power supply. They can work most of the time for most things, but then you’ll encounter some seemingly random issue that makes no sense whatsoever caused by unreliable power delivery.

There’s really only so much learning you can do/is worthwhile ahead of time though. The most productive (and fun) learning happens along the way. If you have any questions as you go, post’em!

Yep, a case and a good power supply are both very helpful. I can also attest to the Pi’s being quite sturdy; in all my years using them for various projects I’ve only managed to fry 2 of them; the first one a 12v wire came into contact with one the pins (it wasn’t in a case), and on the second I accidentally had one of the GPIOs set as an output directly connected to the 5v supply (always remove power before re-configuring circuits). In both cases the Pi transformed from a single-board computer into a very disappointing single-board heater. On the other hand, I’ve used 2 BeagleBoards and I killed them both within a week, and I never figured out how.

Raspberry Pi has been obtained. Along with RP 4 listed power supply with Pi switch (USB-C), and a 4K micro HD to HD video cable. Do I need a dedicated SD Card with NOOBS preloaded? Case is on its way, ordered after seeing your recommendations. I have an older LCD monitor in the closet, but it doesn’t have hdmi, is there an adapter that can be used or just pickup an affordable new monitor? Thanks again. Looking forward to getting some familiarity with Linux and Python

Yeah, adapters are pretty cheap. If it has DVI the adapter is passive (no electronics, just electrical connections) because DVI and HDMI actually use the same video signal. VGA requires an active adapter since it has to convert an analog signal to digital, so they tend to be a little more expensive, but not much.

You don’t need a pre-loaded SD card, you can just flash the OS to whatever card you have handy. Some cards don’t work properly, but I’ve never had issues with any that I’ve tried. I’ve never actually used NOOBS, just flashed the raspbian image to the SD card using imaging software.

Excellent. Thanks. So I should be able to use the sd card reader on my Windows laptop and use Win32 disk imager (or raspberryPi.org’s Raspberry Pi Imager for windows sudo apt install rpi-imager) to flash raspbian (now called Raspberry Pi OS according to rap.org) to a sd card.

The monitor has vga and DVId so I’ll get a DVI to HDMI adapter picked up, as well as a 32GB sd card

Hopefully I’ll get to it today or tomorrow, but might be a few days before I can give it much attention

I’ve got my Raspberry Pi 4 up and running! Hooray! Now what? lol. Someone suggested retro Pie to me, initial investigation makes it look like to install it on top of the Raspberry pi OS is a bit daunting, like I’ll need to access the RPi’s terminal remotely from my pc through SSH? I might need some practice in other areas before tackling this. Any suggestions on where I should go from here? Looking to gain some ability and confidence from command line, some understanding around programming and computational thinking, and moving toward being able to learn and use a language like Python

Have you seen this page? https://projects.raspberrypi.org/en

It has kind of a “for kids” look, but it might be a decent starting point to try out some simple projects and get a better idea of what kinds of more advanced projects you want to work towards. 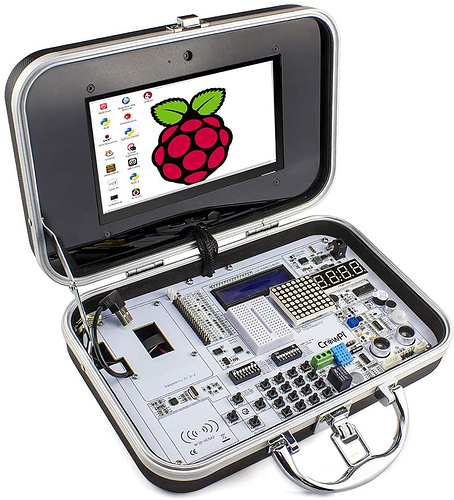 Someone suggested retro Pie to me, initial investigation makes it look like to install it on top of the Raspberry pi OS is a bit daunting, like I’ll need to access the RPi’s terminal remotely from my pc through SSH?

Nah. Simplest method is to just download a pre-built image that already includes RetroPie and burn it on an SD card, but that’s not very exciting since you’ve already gone through that process and it wouldn’t really be anything new for you. Still, it can be a fun project to play with, but you don’t need to SSH in if you have a keyboard and display connected directly to your Pi. There are official instructions for installing RetroPie on top of Raspbian, so I’d recommend following those.

I like @ssaner’s suggestion for finding a project to do and learning from that for diving into something new. I find learning as part of a project to be more rewarding, and that the things I learn “stick” better
than when I’m just trying to learn for the sake of learning. Of course there are a million places on the internet to find projects or inspiration for a project, but I like that @ssaner’s link has a bunch of filters to help you narrow down on what interests you.

@ssaner I have started poking around on there a little, I’ll dive in on something and see where it goes! Thanks!

@David That looks wild! I’d take a class on that!

@dom Think I got RetroPie up and going, seems to be working without doing anything too complicated. I’ll find something on the projects page and see where it leads. Thanks!