Just a heads up,

A couple of changes are being made to the ENCO manual mill.

The DRO is not fully attached yet, but it’s maybe 85% of the way there. I need to verify that the rail is parallel to the quill, and also tap a bigger hole to bolt the slider to the quill. As well as come up with a better mount for the read out. 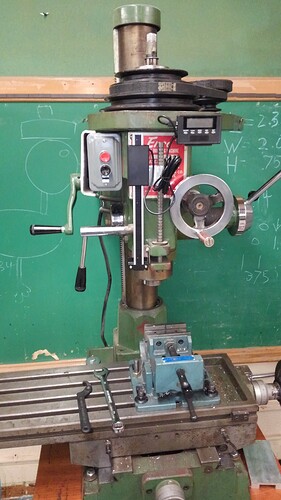 I think I have it all setup now. I have not calibrated the DRO against a 123 block or micrometer yet, but I finding some interesting numbers.

A full rotation of the fine adjustment wheel should be .080, but ends up at about .084 on the DRO. A second rotation should be .160, but reads almost .170 on the DRO. Which, might make it a bit difficult if you’re trying to turn out parts with aircraft tolerances, but for hobby type projects, that should still get you a fairly good part. 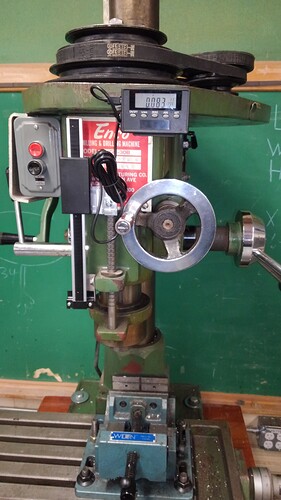 The other fun was trying to figure out how much backlash was in that fine adjustment wheel. It looks like there was about .020inches of slop in the wheel. So if you tried to lower the cutter down .030 after raising the cutter a full turn, it would be possible to move the endmill down .010… Or more annoyingly, no movement at all if you are trying to go for a fine surface finish.

So with the DRO attached ‘directly’ to the quill, you should have a better idea of how much the end mill moved down with the added bonus of not needing to be super tall to read the graduations on the fine adjustment wheel. 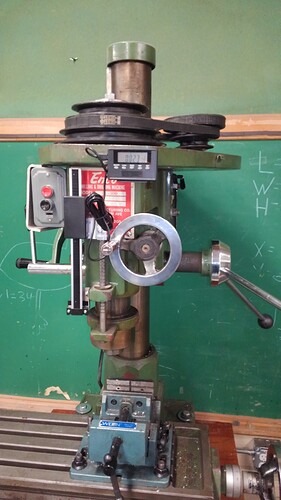 Just a thought, are you certain the DRO is reading in the same format as the Enco (mm, inch, etc)? I installed a similar DRO on my quill to go with the 3 axis DRO on my Bridgeport clone. I do not trust my quill DRO as it gives me different numbers than I get on my 3 axis DRO. I had bought a cheap one on Amazon, eats batteries while off, and gives conflicting measurements. If you are aiming for accuracy, a few known measurements needs to be checked to confirm numbers on quill DRO are accurate. I just got in some new 2-3-4 blocks and 2-4-6 blocks if you want to use them to test a larger range than 1-2-3 blocks can do. The Enco should never be treated as a drill press, that would be a waste of potential. It will do almost everything my Bridgeport clone can do and if treated good will last longer…

We have some 1-2-3 blocks in the husky tool cart, but I’m not sure how much they’ve been banged up over the years.

The DRO measured in pretty close to those measurements within .003 on the worst deviation. 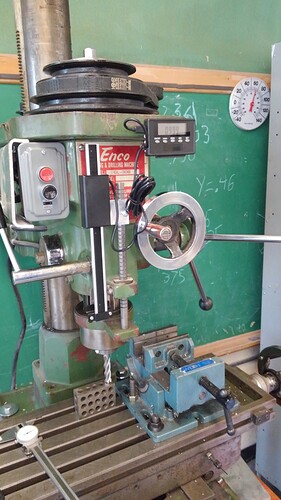