Many of both my paternal and maternal ancestors are of Swedish descent. I also grew up near a Swedish farming community in Nebraska. As a result, we have some fun Swedish family traditions, mainly involving food, like ostakaka and potato bologna!

One icon of Swedish heritage is the dala horse. I’ve always thought the dala statues in Lindsborg, KS, were cool… and after hanging around MakeICT long enough, I finally came up with a way to make one myself. I decided to build one to give to my grandmother. Here’s the final product on her porch in Nebraska, just in time for the 2019 midsummer festival the town hosts. 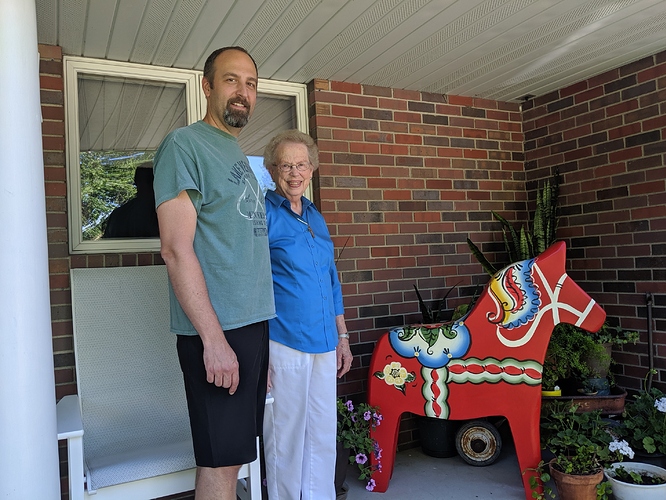 I started out by finding a 3D model of a dala horse online. I pulled it into Slicer for Fusion360, which worked great to generate the pdf (attached below) with all the different pieces to cut. However, I discovered that the 3D model I used wasn’t symmetrical… so the sliced pieces were quite different in size and shape between the two halves of the horse. I decided to just use pieces 20 (x2 for the outsides), 21 (for the remaining leg pieces), and 17 (for the middle without legs). This still got me the general shape I wanted.
Dala Horse - 48inX48inX0.5in Plywood.pdf (607.6 KB)

At this point I’m a bit embarassed to show what I did… I’ve taken the shopbot class and this would have been a great application for that tool. However, I went old school… my kids helped trace the pieces on 1/2" mdf using a projector in the garage: 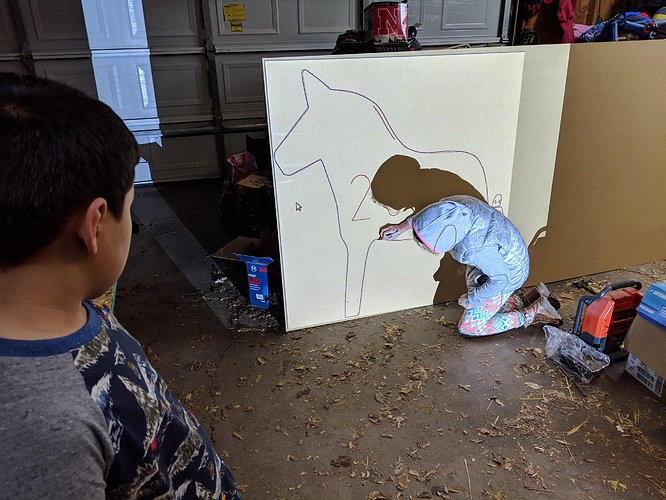 And then I used a router to hand cut all the pieces (it was a dust disaster): 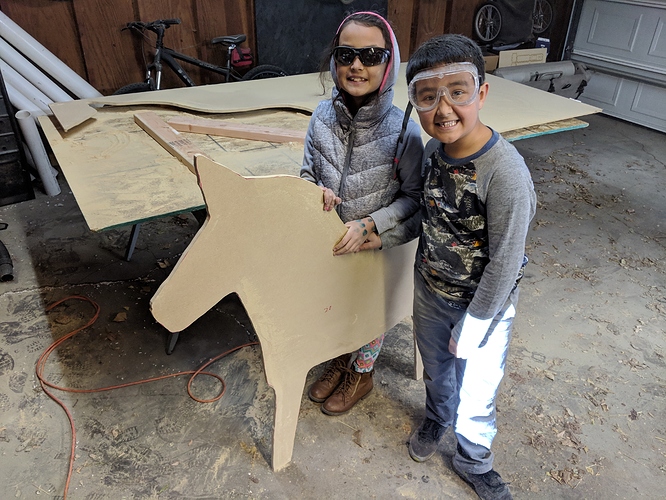 When everything was cut, we did a fit check holding everything together with clamps. One of the requirements was to ensure it was the right height and width to ride… we had to cut a few more pieces than planned to make it wider and more stable feeling. 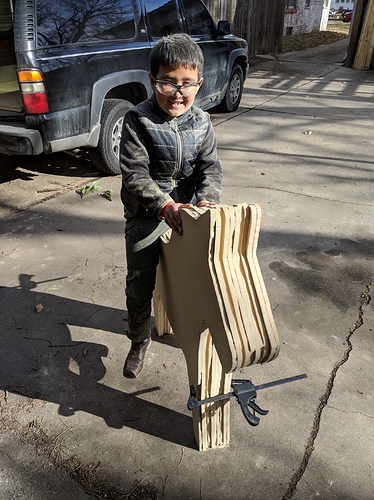 Once we were happy with the size and look, we glued all the layers together using wood glue. We ran a few dowels through the legs and nose to help keep it together over the long haul, too. 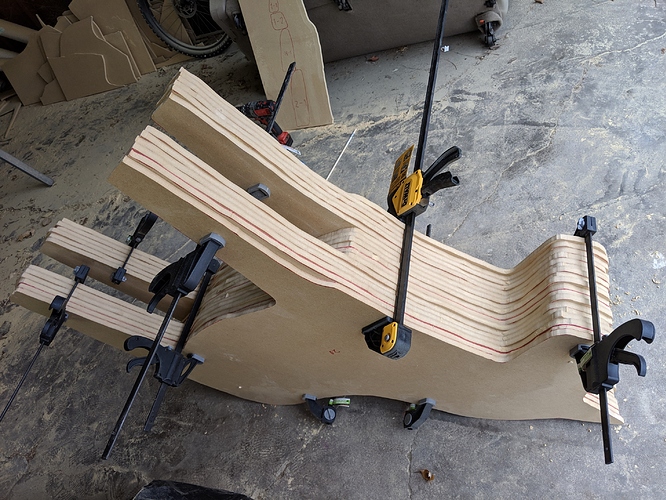 In the previous photo, you can see how uneven the surface was because of my super accurate hand routing job… so the next step was (too many) hours with a belt sander to make it look pretty. Then I primed it with several coats of an oil based primer. 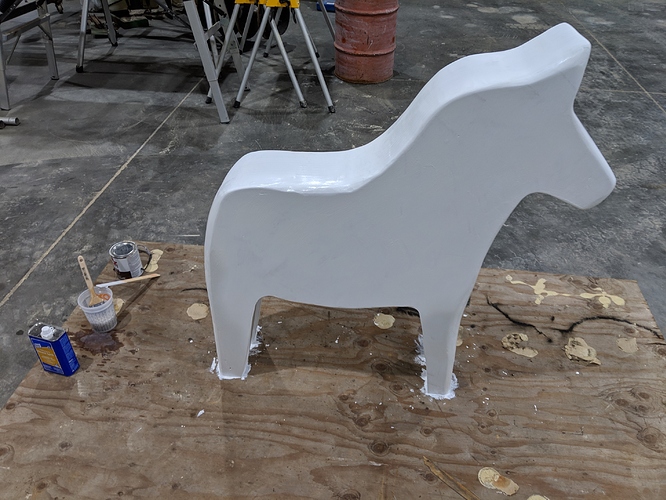 Red is the traditional dala horse color, so I thought that was most appropriate for the first attempt at building one of these. I did the base red coat, again with oil based paint. Then my wife and her friend did the artwork on the horse. I sealed it with several coats of polyurethane to try to make it somewhat weather-proof, too. 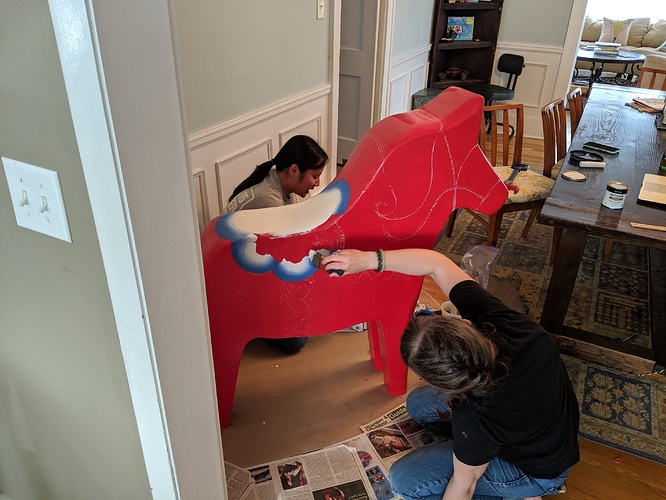 I’m happy with how it turned out! It weighs over 200 lb… which is a little crazy and scary. Next time, I definitely need to cut this out on the shopbot and cut some holes in the pieces going on the inside to create voids and make it lighter. Thanks for reading! 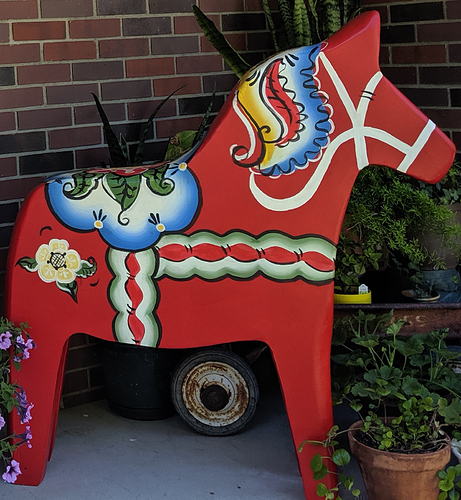 Could you have done it on the shop bot? Eh yea. Did you have to do it on the shopbot. Heck no. I think they way you did it was awesome, and the kids had fun as well. Awesome work!

Man they are getting big!

Many of both my paternal and maternal ancestors are of Swedish descent. I also grew up near a Swedish farming community in Nebraska. As a result, we have some fun Swedish family traditions, mainly involving food, like ostakaka and potato bologna!

That explains your uncommon first name…you’re from Nebraska!

, Jens. I really like that the kudos got to help.

That’s awesome! And with it being over 200lbs it’s less likely to get stolen!

Very cool! That hand painting is spot on.

This is amazing! I love the process and the finished horse. But, I love even more that it was a family project that celebrates your heritage and that ALL of your family should be very proud of! Great job!!

Fabulous family project and an even better keep sake.

That is beautiful thanks for sharing.