Hey all, just a quick post about the newly donated cabbing machine. It currently doesn’t look pretty but it is a fairly sturdy machine and once we give it some TLC it’ll serve us well for a while.

If anyone wants to pitch in and donate some time and elbow grease to help me get this up and running here is what needs to get done to get it ready for the next phase:

We also need to keep our collective eyes out for a slab and trim saw to go with the cabbing machine.

Rust you say?
Can we strip the electronics out of it?
Is it steel?

I’m thinking electrolysis, a solid scrubbing, and a powder coating?

There is a big gray tub under the wood bench in the electronics lab. Also a white power supply on the top shelf on the south end of the beige workbench.

The main structure has no electronics so I suppose we could try it if it fits.

I’d come in and help but I can’t get a kitchen pass, unless you let me take it for the weekend and I process it in my rig at home.

I’ll see about electrolysis, clean it with a wire attachment on the angle grinder and give a coat of 3n1.

I have no problem with you taking it and giving it a go. The main body is held to the tabletop with 4 screws. Fully expect those 4 screws to twist off, they look a bit rusty themselves.

I got retasked by the boss lady. I’ll look at it Monday if no one else has.

Actually, I got her to change her mind but it cost me. So I will pick it up tonight and return in on Monday and I’ll try to remember to film the process. Nothing exciting I hope.

In fact if it gets exciting I’m not allowed to do it anymore.

It’s a nice day again today so I did some wire brush on the case. I did find a hole that will have to be welded probably. And the electrolysis did help quite a bit. I learned I suck with an angle grinder. But I’m getting better. I’ll be bringing it back up to the space so everyone can take a turn wire brushing the thing. I’ve been spraying down the exposed metal with wd40 to avoid re-rust. 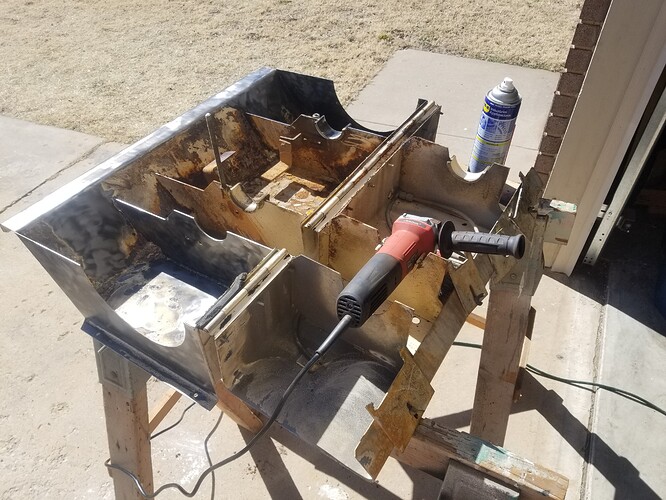 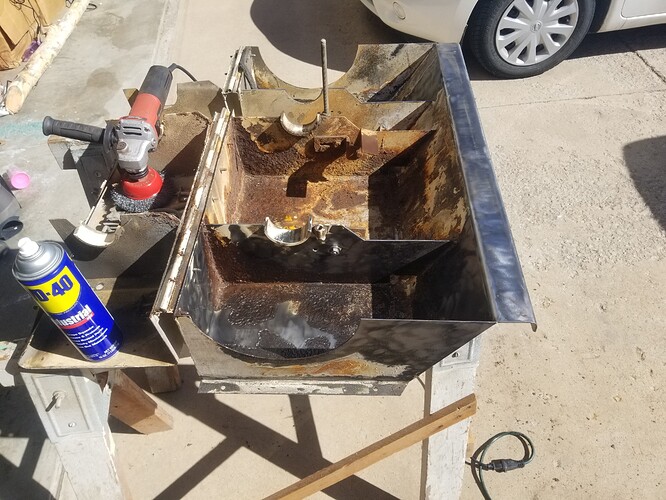 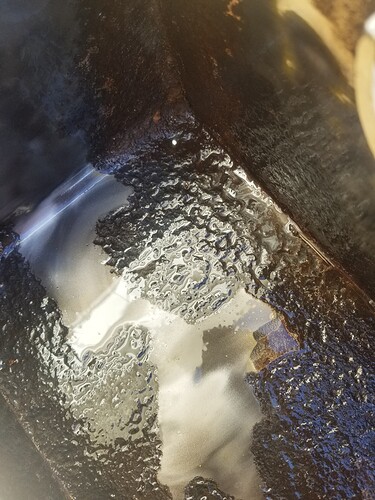 There appears to be a considerable deep rust. I’m wondering if some kind of epoxy coat or removable plastic liners might work better than the current plan?

Or completely replacing it with stainless steel?

Not positive but I think the plan is removal some welding repair and then powder coat pink with sparkles. I’m along for the ride though so don’t quote me

I was hoping the rust wouldn’t have broke through but was sort of expecting it. The original/current plan was to remove rust and then powder coat. It looks like the hole is small so a little touch up weld should take care of it as long as the rest is recoverable. Worst case scenario at this point if there is more rust then metal left is maybe cutting new plates for the basins and welding them in.

I’ll bring it in Tuesday. That’s the only hole I’ve found but there is a lot of pitting.

Dean was asking about this last night. He has some friends at WSU that are willing to let us chuck this in their giant sand blast cabinet.

We’d be doing the sandblasting…

I’m good with that… at least I got some practice with the angle grinder.

Update: it is back in the metalshop!

Keep us posted, the cabbie McCabface Cabbing machine project is getting interesting!

Just got to check it out. Well done with the cleaning in that one side, kind of gives a good view into how bad the rust is.

Probably best bet is to try to get it into a media cabinet and blast it, just too much a pain to get into the corners where the heaviest rust seems to be.

Spent some time with good old hammer and chisel trying to knock out the thick boils in the center. Sir Cabbie Von Cabbington II has a long way to go but it’ll be worth it.

Dean and I spent some time this evening sandblasting the cabinet… It’s not perfect, but it does look a little better… 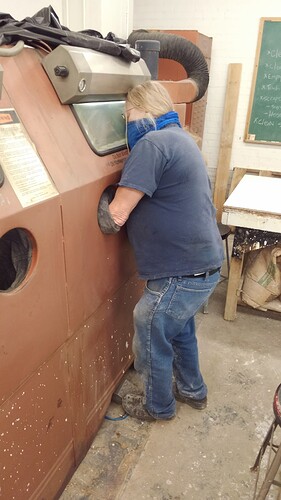 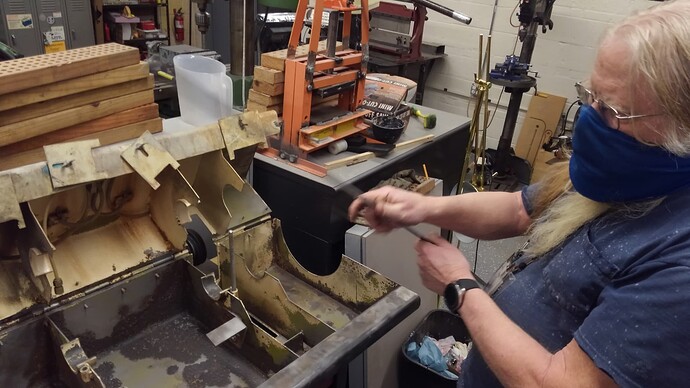 I’m not well versed in powder coating. Can it be done over primer or does it need bare metal?

There is a primer we use at Transit that supposedly halts rust and turns the layer of rust it is applied to into something more stable to work on/with. No idea about the science behind it but I know it works on small/medium patches of rust.

Powder coating, like paint, can be applied over primers, plating and other coatings when compatible.
But outgassing during the heating process needs to be dealt with. Several techniques can help, like heating the initial coated part for long enough to completely remove volatile components prior to powder coating. And/or very light powder coating in multiple layers so that the initial powder coating is porous.

A Google search for “corrosion resistant powder coat outgassing” might inform better than I can here .