I’ve got metal authorization, but not welding yet and need some help getting a 6" SS ferrule tri clamp welded to a (I believe) SS lid. I’m not good at identifying my metals, but nonetheless, I need to cut an opening out (plasma cutter?), then weld the ferrule onto the top of the lid. Can anyone with authorization provide assistance? Can bribe with free Augustino Brewing beer! 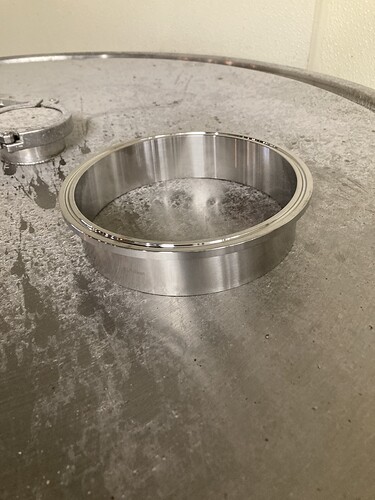 Thanks in advance!
Augustine

Whoever does this needs to do two things that might not be apparent to all. First, the plasma cut edge will need to be ground back to remove all of the nitrided material. Second, it will need to be backgassed. If this was an exhaust or something, one could live with the sugaring, or could use something like Solar B flux, but for food grade stuff, it needs to be backgassed. I don’t know that we have the stuff there to run two streams of argon for this. If it can wait, I could do it, but my shop is currently in shambles after moving everything to fit new toolboxes in. Anyway, make sure whoever does it knows what they are doing, and has the equipment to do it right.

Thank you for the feedback. I’m honestly unsure of some of the terminology here, so hopefully someone else understands it and is able to assist. I had also considered trying to drill a pilot hole and cut the circle out in lieu of the plasma cutter, but I’m thinking the plasma cutter would be cleaner and, in theory, easier.

I’d like to get this completed sooner rather than later and if it’s better to just find a welder outside MakeICT that knows how to do this, I’m certainly open to suggestions. Was hoping someone could help, so I have the opportunity to learn a little more about a subject I’m not too familiar with.

Is the end use of this tri clamp going to involve any kind of food of beverage prep?

If it does, then we would definitely have to take the extra steps to be cautious like Dave said.

Cutting stainless steel can be a real bear. Even the easy way, plasma cutting, comes with its own challenges. That’s not saying it can’t be done, just that it can be difficult to get satisfactory results. SS tends to warp when cut with a plasma cutter. Because your part has other features, that should be minimal, but it can be a real problem when things are supposed to seal up. The welding can do the same thing. Cutting it with another means like a big hole saw can also be troublesome since SS tends to work harden. If the saw starts to rub, the material can become so hard that the saw won’t be able to cut it anymore. Again, not trying to scare you away from this. Just making sure you understand why not just anybody with a welder should be trusted to get it right.

hmm… with a 6in diameter hole, it almost sounds like it would be more straight forward to grab a metal cutting jigsaw blade and clean up with a die grinder instead of plasma cutting this one.

If a hole saw is used on SS, keep it wet, go slow, and blow out chips often. Sometimes it is better to weld a fitting on before cutting the hole as well to reduce warpage.

As someone who doesn’t work metal this is actually a fascinating conversation.

Yes, the triclamp is connecting to a steam condenser on my brewhouse boil kettle.

Would a weld only around the outside of the column work and be safer and require a little less concern, or would there still need to be welds on both the inside and outside of the tri clamp ferrule?

If you’re going to use that as a fermentation tank or bright tank, you’re going to really need someone who has the setup to do that as noted above. Just cutting it presents problems. I tried to cut down some SS to put down in my mash tun and it got hot and warped.

Delta Airlines TechOps has a bunch of stuff on-line that goes into SS welding and I think you’re going to need to purge the weld side and the back side to do that. AFAIK, I have not seen anything in the space that can do that setup. You might also need something called chill bars. I kind of gave up on SS after reading a bunch on it and decided it’s not really for the hobbyist welder, especially food grade stuff.

Maybe call over and talk to Ian or Nathan and ask them who they used the last time they built the fancy hopper.

EDIT - I didn’t see the condenser post on the kettle. Um, if that’s just going into a steam jacket, is it considered food grade?

Thank you everyone for the input. I appreciate it!

I work with food grade items everyday, if the steam doesn’t come in contact with your ingredients technically you do not need a sanitary weld however if is best practice to make ALL welds sanitary. The advice given here has been spot on and accurate unfortunately sanitary welds are a time consuming and specialist skill. I hope you find the right person for this 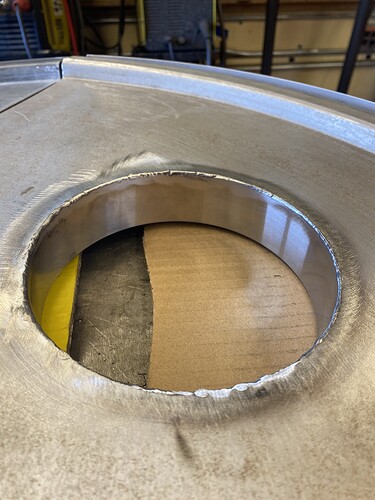 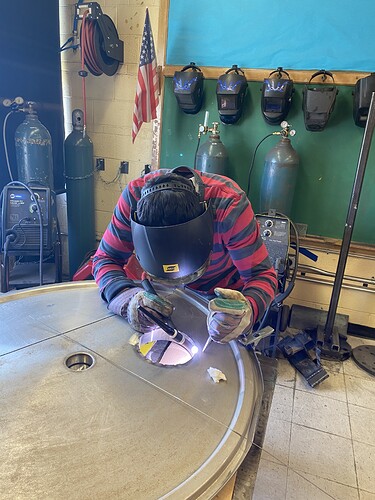 Nice work! You have some skills!

Has been an interesting “simple” project to follow! Thanks for the posts!