Anyone have something that measures sound? Decimeter?

I noticed the forge group was gonna try some things out that required someone measuring sound loudness. I have wanted to do that myself. (Especially when we have music-type things in the space.) If I owned one, I would be itching to find things to measure. Does anyone have one?

you want an SPL (sound pressure level) meter. However, there are apps that will let you do the same with your phone. I would want to reference another source, though, as each phone’s mic may differ in sensitivity.

I have one on mine for making sure interior bus noise levels are acceptable pre-passenger. The big thing with app based solutions is getting them “zeroed” out to the level of your phones mic. Even then they can be finicky, but still do in a pinch.

Sound for the Forge Group. Outside noise is a concern due to annoying our neighbors. Consideration was given to noise levels in assigning the spaces within the West Wing. Metal and Wood spaces were chosen to be the farthest from Drollinger St.

The Forge will be outside. Reasonably near the metal shop. So perhaps the neighbors of concern will be the other side of the creek.

We should have two areas of concern for sound levels. Annoying the neighbors and potential damage to our members hearing. So look at the chart attached. Consider that there s a 6 dB drop from your measured sound level if you double the distance. So look at the Jet Aircraft Engine shows 140 dB at 50 meters. Move to 100 meters and the level is 134 dB.

Now pound steel, as a Blacksmith would a horseshoe, and measure. Now you know. Consider the process is likely to have an dB level measured in 5 or 10 dB increments, not in single dB increments. Note also the change in sound to result in a 1 dB increase is relatively large.

When you consider the issue of potential hearing loss
to members, the attenuation for distance is gone. Leaving the total sound level to consider. 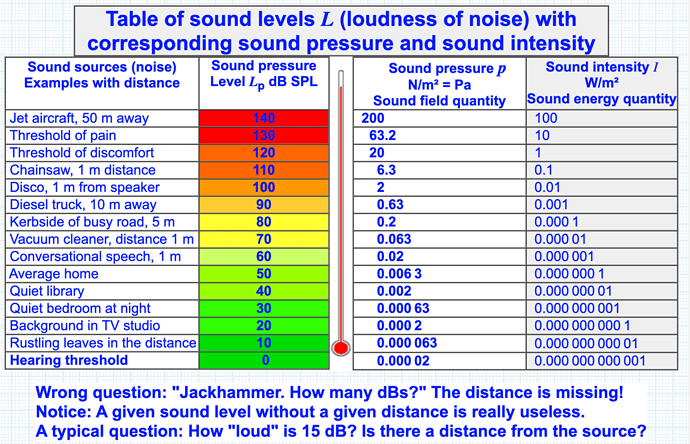 After visiting CSMA in Haysville and considering the small scope/scale in initial plans noise is not our concern. I was standing in the heart of their smithy with two propane forges and a coal forge running the whole time and members and myself could communicate comfortably with raised voice. Hammering on the anvils were not even that bad and the only time I had honest difficulty with hearing/noise level was when there power hammer was used. The spaces wood shop dust collection runs louder then the totality of their shop, power hammer excuded.

During blacksmithing, the loudness of your hammering, forging, and chiseling could reach between 120-140 dB . Thats pretty loud

I concur with your Google search results. 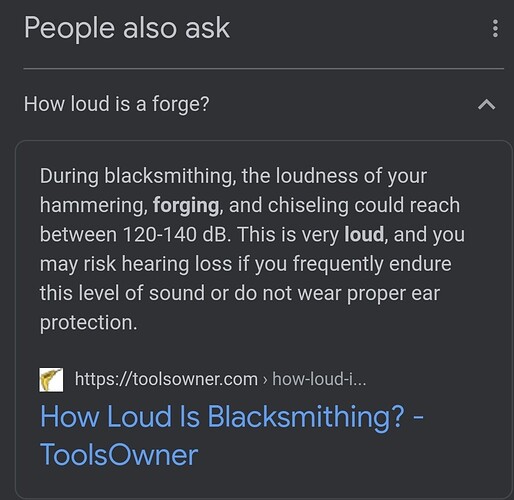 The word could is the modifier in the entire thing. My very first forge I ever constructed was the noise level of the hair dryer I used to throw air to the coals.

All I can relate to you is what I personally experienced tonight while visiting a very active multiforge blacksmith. I really wish the turn out from MakeICTs side was larger because it was a great learning experience. Again I would like to reiterate my position that among the mirad concerns for having a forge at Make that noise should rank low among them.

Ladeana and John - If you guys are still concerned with noise levels, please go through all the noisy equipment at makeict and list all the equipment running over 85db and preferably what the meter reads.

I’ve got more ear plugs on order for the metalshop but it would be nice to slap ‘hearing protection recommended’ signs on anything that runs over 85db.

Just hang a sign from the ceiling between fablab/screenprint and metal/wood that says “Working Tools Past This Point May Cause Deaf” with a happy face sticker. Problem solved.

Rustin, The issue for me is not the noise itself.

The concern was causing problems for neighbors and potential damage to members hearing ability. I agree that we have a lot of noisy processing in the maker space. Sometimes I use my ear plugs. I am glad to hear that enough ear plugs are being used that you have to order more.

Most of my posts on this thread regard the value of the app on your phone if you want to measure and how much might effect the neighbors.

I would like to point out that there are significant factors besides sound pressure levels to consider, both for potential hearing damage and for how disturbing a given sound is perceived.

Besides distance, duration is a concern. And the dominant frequencies and constancy. A really loud fan can be a minor disturbance while doing significant hearing damage. Same for wind and traffic sounds with an open window in a motor vehicle.

The sensitivity to unexpected sounds is a huge factor for whether a sound will disturb a given listener. Cats being tossed into a wood chipper can be very disturbing while not causing any hearing loss at a given distance.

Annoyance is very individual and subjective. Leaf blowers in residential neighborhoods have become less disturbing the more they have become common. Pneumatic nail gun impact noises are accepted as part of modern residential sounds, but not outside of daylight hours. Gunshots and explosive noises are usually extremely disturbing, but less so around July 4th.

My point is that simply measuring sound pressure levels may only be a single, simple factor as a part of determining what mitigation efforts to take to reduce hearing damage to our members, and to be good neighbors in our location.