@rustin.atkeisson brought up building some sort of stand for the anvil in his chalk board thread. My anvil is on a steel base that seems to work, but it also sits outside most of the time. I have watched several videos that talk about how to support an anvil and most suggest that a big chunk of something solid is the best choice. A big solid block made out of 2x4s seems to be good at having lots of mass.

I’m no expert but what I’ve seen on YouTube is a solid stump of hardwood. Like a big tree trunk of wood that puts the anvil waist high. Metal arts would have good input as to how to mount it.

There are some pretty thick wall 4x6 box sections sitting in the metalshop that I thought would make a pretty good tripod base.

The Haysville metal artisans suggested going with a tripod base since they’re easier to level out and spread out the forces enacted on the anvil. They also suggested mounting the anvil so that the top of the anvil was at or slightly below waist height so that it’s easier to strike the anvil with the full flat face of a hammer.

The anvil bases they had there looked pretty simple, but definitely had heft to them. If I remember right, there was one made from a bunch of 4x4s glued together like a butcher block.

Here’s what they have in Haysville: 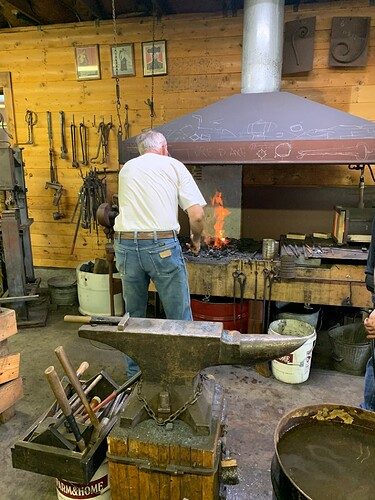 That’s exactly what I was talking about. It could still be made with three high points for stability. It’s the heft and dampening that I think are the benefits.

Would the garden committee or woodshop be willing to sacrifice a 4x4 or two for this purpose? 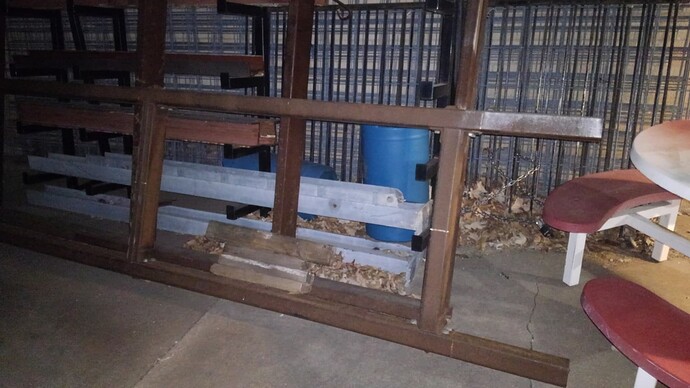 i can get some 2x4’s and drop them by. they would be from an old packing crate.

Some smiths set their anvil height so when they make a fist and hold their arm down, their first just sets on top of the anvil. Of course, in a multi use area, it won’t be right for everyone.

Should set it high then.

If you set it too high for most everyone, we can have platforms of various heights.

Of course then you need to store a bunch of platforms.

Unless you used an old car jack to make it adjustable.

Don’t listen to me, I don’t own an anvil.

Okay, so I have a moment before teaching a safety class…

Based on my height, it looks like a comfortable vase would be about 24in tall (with the anvil and half the distance of a hammer head, that would be about 36in).

Started on the base tonight… Built from 6x6s.

Turned out that was a lot cheaper route than 4x4s.

I’d still like to route out a relief in the top for the anvil itself and do some steel banding around it. 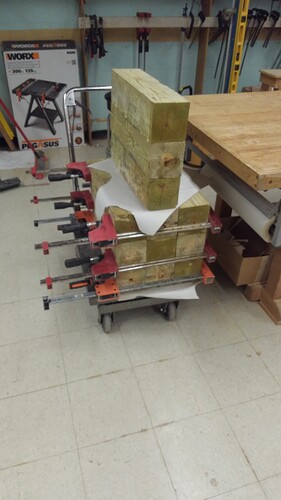 Did some steel banding around the base tonight, and got some practice hits in. 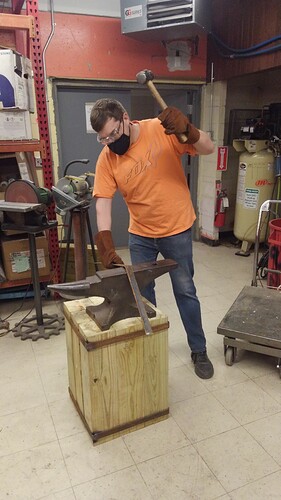 Also, thanks @squarenuts for the use of the woodshop to glue everything back together. As a thank you and welcome to lead life, the glue has been wire brushed off the 24in Jet bar clamps. 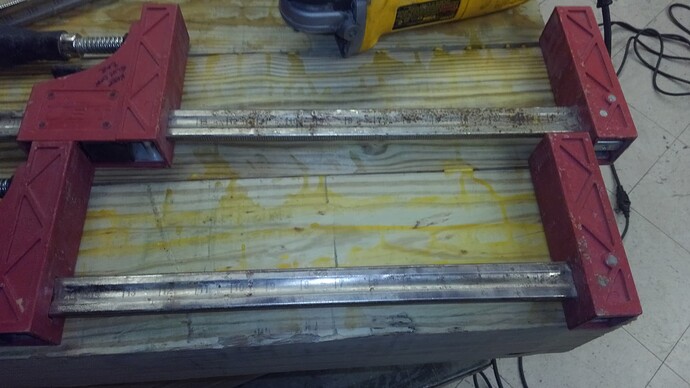 I wish I had known… I have a large pile of 6x6 posts that used to hold the rear deck/back porch roof and front porch roof that I am not going to reuse… Replacing with steel, the longest pieces are around 10ft.

I’m kind of digging this aesthetic…

and there’s still a couple of buffer’s in the jewelry lab that could use a stand.

Might also see if jewelry wants one to pound things on. We had a big ole stump at city arts my brother made a bunch of bowls on.