As the weather warms up, it’s important to walk the building before setting the alarm. Last night I found a window in the cold metal shop open. 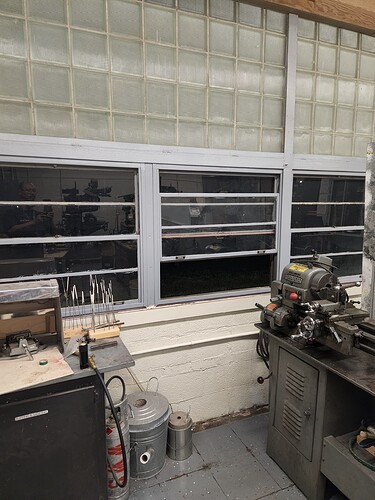 Also, if you open a damn window, close it!

Please also check behind any and all curtains. As more than a few times, those have been loose or completely unlatched.

Just a reminder, if you open the windows, you are expected to open the curtains as well. That serves as a good indicator that the window should be checked. We can’t expect the last person to look behind every curtain in the building.

Folks, I can’t stress enough, if you want to use the windows, you have to be responsible. If you open it, close it and lock it. It is that simple.

Also, if you open a damn window, close it!

Maybe some F-bombs would help.

Maybe some F-bombs would help.

-smh- I will have a talk with the culprit tomorrow and post a pictorial over the window of how to close the window since they apparently didn’t listen during my safety class or read the sign on the door before they left.

Kind of goes along with wiring the windows to the alarm, but maybe we can wire the windows to a siren in the room so that when the lights are turned off if the window is open the siren goes off extremely loudly! Not like loud like the alarm is annoying but loud like make them change their pants loud!

Somebody opens a fire door and an alarm sounds for the windows not being shut.

As I was leaving last night, somebody else was also getting ready to leave. I said I would check the West Hall if she checked the South hall. So she went to the end of the South Hall and yelled to see if anybody was there but I had to ask her to actually go check the windows for her to do that.

How about putting switches on the windows that tie to a green and red light in the hallway. Then when a person locks up they can look down each hall and see the condition of each room.

Signs tend not to get read… no matter how big that sign is.

However, tie an annoying loud buzzer to it (and the ability to run that buzzer wirelessly) and people will tend to hunt down the problem or flee the area and report it.

that’s what made the annoyatron so successful.

Do we still have the 5 gallon bucket that was full of magnetic reed switch door/window position sensors donated a few years ago.

I’d suggest a room be selected for trying out the practicality of adding optical/magnetic/proximity sensors and possibly spring strips under windows so unlatched windows are sensed as not closed.

First question is whether there’s a cost effective way to detect open/unlatched windows. Then, questions of how to annunciate or integrate into alarm system could be addressed.

I’d nominate the ERP lab for experimentation for the reason of sensing usually having an electrical or electronic method and the tools and components are right there to be used.

There is some tendency to over complicate any project by makers generally. But the simplest solution is usually the least fragile, least expensive, and most flexible. Sensing which individual window seems unnecessary, so an ordinary series connection of switches or a break beam type of optical sensing sounds appropriate to me. But an individual circuit per room so anyone looking for the sensed open/unlatched window(s) isn’t having to check everywhere everytime.

I don’t advocate this instead of walking the building when the last one out. Fans, heaters, a/c, lights and occupancy, etc still need to be checked. As well as all exterior doors. Additionally the exterior doors from the boiler room and room 4 could have sensors detecting a closed and latched condition could be of benefit and practical.

The current situation fails to address the problem sufficiently to just continue, and adding signs, policies and enforcement isn’t likely to solve the problem.

I still believe limiting the number of windows that can be opened should be part of the solution. I know that people are not walking the building or else we wouldn’t find fans on, lights on, Windows open, etc. Hell, people won’t even take the time to clean up after themselves. So I expect people who are willing to do it right mostly already are.

I agree that a series connection is fine. Once somebody knows which room to check, especially if there are only 2 or 3 Windows to check, it should be an easy process to do so.

As noted, this does nothing for turning off lights, etc, but my real concern is the security of the building first.

Ensuring that windows are closed it pretty easy with proximity or reed switches. Checking that they are latched Isa different matter. Maybe we need to print some spacers to lift the fixed part of the latch so that all the latches are about to fully close. Then some sort of sensor could be employed there too. Another option might be to add a different latch or bolt near the edge of the sash that can be more easily monitored. There’s nothing that says we can’t have redundant latches or remove the one not used.

Unfortunately, what we are doing isn’t working. Reminding people repeatedly, pointing it out during orientation, etc. Is not getting the point across. We could tie setting the alarm to somebody’s badge. I really like the idea of being able to confront a particular person about their negligence, but it risks alienating users and we can’t drive people away. Ultimately, big picture, I think we need members more than they need us.

I agree somewhat about discussing reducing operable windows, but would probably favor some limited number of welded bars or other reduction of windows being able to be climbed through over limiting use of windows for free, wind powered ventilation.

COVID-19 should have taught us about the health benefits of good ventilation. And good stewardship of the earth should make us favor natural ventilation instead of fans in moderate temperatures.

But we need better information on the options for and cost of window/latch sensors. And I suspect the incremental cost of more sensors on one circuit is much smaller than the cost per monitored circuit.