So one of the things that I’ve got is an SDR and a weather station (Acurite 5 in 1), which I use to read it, and I realized just how odd a situation it is.

Even though that sounds pretty complicated it’s really not, I had some annoyance at how to plot things. (Also because I deliberately left silly steps in, all but filtering the log/plotting/posting are done automatically.) 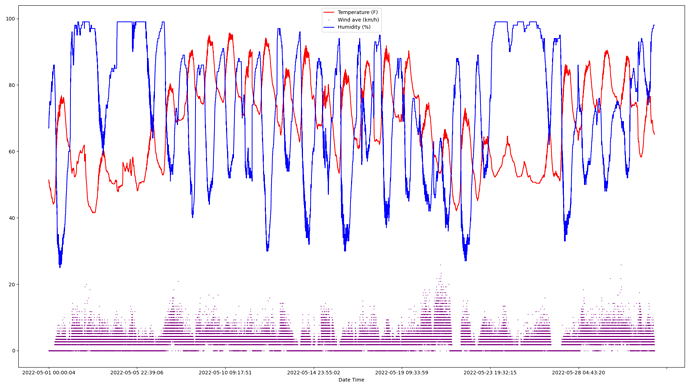 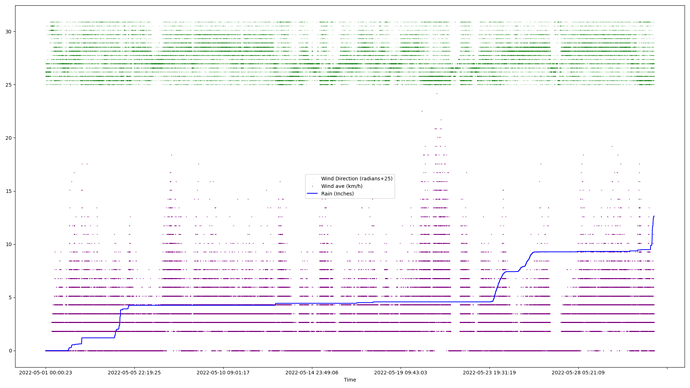 From: NWS summary: Text Products for CLI Issued by ICT 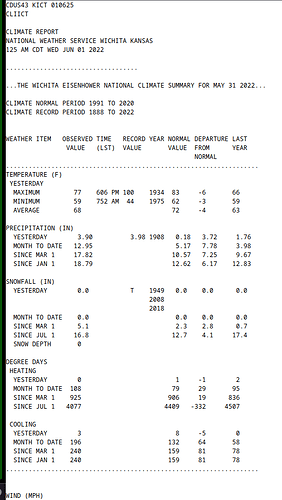 It was REALLY rainy this month, more than double the amount of rain (I got 12.64 inches) as normal.

Some notes on this: The wind sensors are discrete direction is 22.5 degrees, the speed sensor is in full rotations per time period (about 40 seconds) and neither is terribly consistent (Partially because it’s a bit close to a building.) That’s why the scatter plots. especially the wind which starts from degrees/radians clockwise from north, so bottom of the green goes: N, NE, E, SE, S, SW, W, NW and back to the bottom/North.)

Take the wind with a grain of salt too, I have another wind sensor which is in an even worse place, and they don’t line up very well at all in terms of direction/speed. Also it had an inaccurate reading somewhere in that process in 166.5 (max)/155.0(ave) m/s… I say inaccurate because I haven’t had a <30 second F-6 tornado hit my house. (I say F-6, because the old Fujita scale specified values up to F5 at 318 miles/hour (which are high based on subsequent research), and it’s even above them at 372 miles/hour. The new Enhanced Fujita scale only goes 200+ miles/hour is EF-5, and well F-6 sounds more impressive.) Also the readings before and after were 0 & 0.5 m/s windspeed. )

The oddest thing about this… there was actually a period of calm winds for a while, TWICE in Wichita in a month!

KFDI said this morning that this May had the second highest rainfall ever recorded for a May in Wichita. We missed the highest by a small margin - maybe 1/2 an inch?

From: NWS summary: Text Products for CLI Issued by ICT

I thought the National Weather Service had embraced a new product for the Command Line Interface, when I first read this.

LOL, in my former life as a programmer, one of my jobs was to grab and parse weather data from the NWS (or foreign equivalent) for every Marriot Hotel property around the world to display on their (the hotel’s) local intranet page. Because reasons.