Hi! I need help with my Raspberry pi. It used to be able to connect to my windows computer via SSH. Now it’s saying that the connection timed out. What do I do? How would I ensure that it’ll connect this time?

Can you ping the RPI from your Windows computer? Go to the command line, type the command ping followed by the IP address of the RPI.

I’ve been trying to ssh the RPI from the windows computer using an application called Putty. Whenever I ping it, it says that it’s disconnected

How is the Pi connected? WiFi or Ethernet? Directly connected to the Windows computer? If it’s a wired connection, are the link/activity lights on the Pi’s ethernet port lit?

The red light is still lit. It was connected via ethernet? I think. Hardware works fine. Probably network issues.

What about the orange and green lights on the actual network port on the PI? Are they on and/or flashing?

Is the Pi on the same network as the Windows PC, or are they in different locations? How do you get the address of the Pi? Do you have the IP, or is there a DNS entry?

When I plug in the pi, there’s both a red and a green light at first. Never heard of an orange light. Eventually the green light fades and the red one still remains. Yes, the pi is on the same network as the PC. I initially got the ip of the pi on my macbook by using the command, “ping raspberrypi.local”

There are green and orange/yellow/amber LEDs on the rj45 jack (pictured below) where the network cable plugs in. If you are using wired ethernet these will light up if you have a working (at least at some level) connection to whatever is on the other end.

Although, I guess this depends on what version of Pi you have. The original pi didn’t have lights on the jack, or if you have one of the smaller form factors you won’t have an rj45 jack at all and would have to use WiFi.

If you can use the Mac to try to ping raspberrypi.local again as a test, it is possible that the IP address has changed since the last time you did that since it sounds like you are using DHCP rather than a static address.

If that doesn’t get you anywhere, what OS are you running on it? If it’s the full version of Raspbian it will have a GUI, so it’s usually pretty easy to plug in a keyboard, mouse, and HDMI monitor for debugging if you have those available. 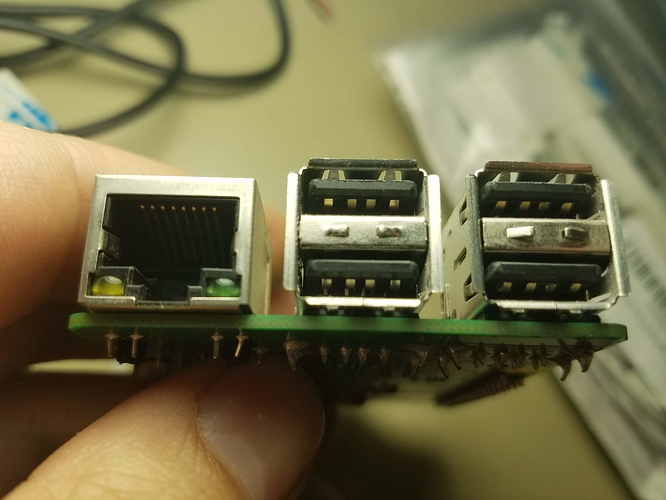 How do I change the IP address of the pi to be permanent? When I used my MacBook as a test, I used WiFi. By the way, I just tested the command on my MacBook and it said the connection timed out.

Update. I tried looking on other forms for a solution to the problem that the connection refused on ethernet and timed out via WiFi on putty. I typed a bunch of commands in the console from the forum. Now it says my pi is unreachable. What do I do?

If you’re still having problems with this and want to stop by the makerspace this week I could take a look at it.

Which day would work best for you? Keep in mind I have school.