Hi, so I recently had to leave town for a family emergency where I had to be a caretaker. I thought I had picked up and left my fired pieces at home, but I think I actually forgot entirely back in January when I left. I had some fired pieces that I think got left on the table that had been fired at the end of December or early January.

I’m devastated to come back to see that they’re gone, I know I can only blame myself as I forgot to pick them up, but I don’t know if anyone might have put them away and if they’re still around here somewhere. I really really hope they are, they were supposed to be gifts to my boyfriend and I worked so hard on them.

I have a picture that has the three that I’m missing, they all had a W on the underside and I believe they also had my initials JRA, but I know they at LEAST had the W. Any and all advice is really really appreciated. 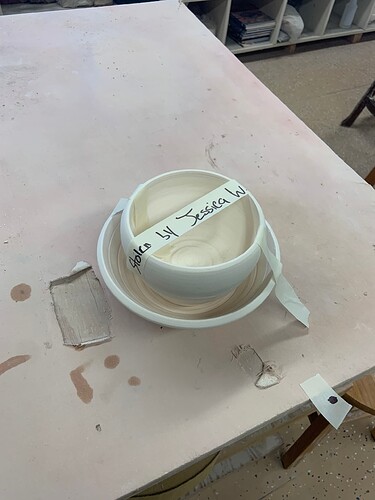 I just found two of them on the shelf! The only thing I’m confused about is them saying “stolen by Jessica W.C.” I’m Jessica Ramirez-Auman, I definitely made these, is there an unrelated person named Jessica who had them?

I am still missing one, it was a bowl bigger than these two pieces. If anyone has any info I would REALLY appreciate it!

We do have a member named Jessica with those initials. Perhaps she took them by mistake or grabbed them when they were unclaimed for more than 30 days? @Noahjwc?

Yep! I labeled them that way on purpose. JIC.

Michelle!( Not Malissa! I’m so sorry!) was about to toss them as they had aged out or something but they were too pretty for that. I was advised I could have them as they’d been sitting there too long. I labeled and moved them in case someone asked.

Thank you so much for the reply! I can’t tell you how much it means to me that at least these two survived. I think the third bowl probably got tossed or someone else finished it, either way I’m happy that some were recovered! Thank you thank you a million times for saving these two pieces for me. I’m never going to be so careless again.

I wouldn’t thank me.

If I hadn’t heard from you in a month I was gonna jack em.

I’m glad that a couple of them were still around for you. We do clear things out after a while. While I certainly hope you don’t have to leave unexpectedly again, let us know and we can set your things aside if you’re not able to get back to them within 30 days or so. ceramics@makeict.org

What happens is we have LIMITED space, so, if things are fired and not claimed within 30 days they get moved to the end of the table and become FREEBIES for anyone who wants them. The Ceramic Leads make regular posts on the Forum letting people know. Also, anything you make that is drying that has not been labled or dated usually goes to reclaim after 3o days. I know I have taken some freebies to practice glazing. I’m also the one who told Noahjwc about the unclaimed freebies and suggested they practice glazing. I’m sorry you lost some of you pottery, Next time let one of the area leads know whats going on. They are understanding and will help you out as long as they have an idea of what going on. I don’t know for sure if any were yours, but I took some pieces and let my grandkids glaze them and take them home once fired. I am not the only one who does this. It’s been a regular practice about taking and glazing freebies.

Ya it is a good practice so abandon pieces don’t accumulate. And they get put to use by inspiring artist

Well my bad y’all, did not mean to cause so much trouble.

I’ll just make my own stuff to practice on from here on out to avoid any confusion.

You didn’t cause trouble. The same thing happened to me when I first started. It has happened to all of us at one point. It continues to happen to those of us who know the process but forget or things just happen. You simply didn’t know or understand is all. We’re just explainging it so you know the process.

One day you’ll be on the greener side of the other shoe that fits. You’ll forget a peice and someone will take it home and love it.

You’re going above and beyond you’re a good person. You got the pieces because the policy was followed and it takes a big person to give them back. I commend you for doing that and hope other members see what you did as positive.

It happens all the time to me…lol…That’s kind of the way I see it too. When we relocated to our current place, I was going through a huge transition and left a lot of my stuff behind, finished pieces included. I figured they found their meant to be home

You did not do anything wrong, I’m the one that told you that you could have them based on whats always been done before. It’s kind of a glitch but no one did anything wrong at all, no one is at fault. It’s lucky james came back when he did. If you hadnt of grabbed them I was going to let my grand daughter glaze them.