I came in to use the laser today and as soon as I turned Luigi on, it began running itself into the upper right hand quadrant (the head was already there). I quickly hit the escape button and it stopped but it looked like it may have rotated the head a bit. I moved the head to a safe position in the middle of the bed and set the origin and tried burning a project but the laser was weak…I’m guessing it’s out of focus or alignment. At any rate, I’m not sure what the limit switch setup is on Luigi but it should probably be looked at since it didn’t prevent the head from crashing… Another note, the e-stop was depressed when I arrived.

How far is the focal tube extended? If it is out past the red line it will crash when homing.

Hi Christian, Thanks for the reply. I’m not sure where the red line you’re referencing is but here is a picture of the focal tube. 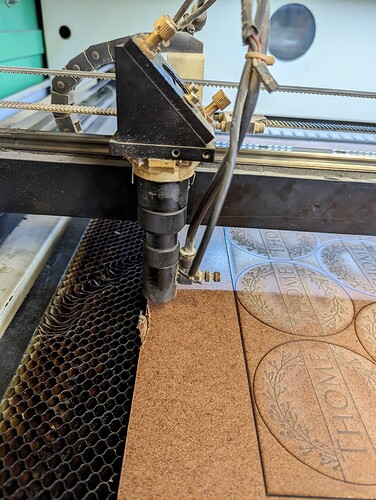 The limit switch on the right was off-kilter so it had obviously been hit. I straightened it out and it doesn’t appear to crash on homing now, but it certainly seems to be out of focus or something. I can’t get it to cut through hardboard…

There is a red line which is only visible if it is extended too far. The optics have probably been knocked out of alignment and will need to be fixed. I’ll be over there this evening at 6:30 to work on some things in the Fab Lab, so I’ll add that to the list. If you could unplug it and leave a sign on it (they are on the shelves with the 3D printer filament) I would appreciate it.

Sounds good, thanks Christian. Unfortunately I had to leave to go pick up my daughters from school before I saw this message about unplugging it and putting the sign there. I’ll make sure to do that in the future if something like this happens again. Thanks again for your quick reply to this and all your work keeping the equipment in order!