I’d planned on a MakeICT event for watching this but it looks like it may be a bit early in the day, current scheduled launch is going to be 6:20 am CST on Dec 25th. Cool that it’d launch on Issac Newton’s birthday^1! If you want to, reply to this and I’ll set it up online via google meet.

If you’ve been following it, you’ll have noted just how many delays it’s had, you might be understandably asking if it’s certainly that time.

For those of you who don’t know, what I’m talking about: It’s the largest space telescope planned or under construction This is one of my favorite images, and unfortunately the text got lost, so link is below. The JWST is the one in the lower left. above the tennis court, and Hubble is to the right of it.

If you ever see JWST is Hubble Space Telescope’s replacement (HST), that’s not exactly the case. JWST will see almost entirely in the Near-IR spectrum outside the visible spectrum. Humans can see some of what it can in the red portion, but that’s hard to see visibly. For reference, Human visible spectrum is (very) roughly 400nm(blue) to 700nm (red) (Well for most of us, recent colorblindness jokes aside, @pwhutchi & @David.) JWST can see between about 600nm to 5000nm with one instrument and 5000nm to 27000nm with another. Whereas Hubble covers 200nm to 1000nm and 800nm to 1700nm.

Also, JWST will only last for about 10 years because of fuel. I can imagine that it will be extended as much as possible, but unlike Hubble which has the remote possibility of being serviced again, because it’s in Earth orbit, That will be unlikely in the case of the JWST as it will be orbiting the L2 point, which will be further from Earth but because of Earth’s gravity have the same orbital period. Lagrange point - Wikipedia

The launch, cooling and calibration process will take about 6 months. Getting to the orbital location will be about 30 days. If you haven’t seen this video you should. 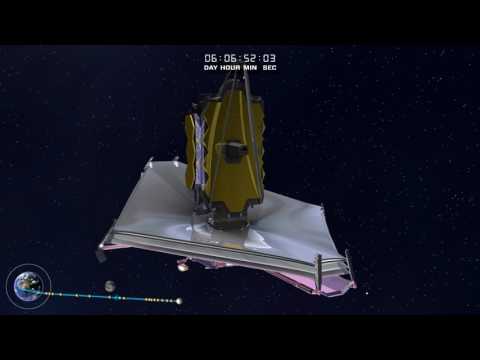 I am barely old enough to remember things like Hubble’s Deep Field ( Hubble Deep Field - Wikipedia ). My school had a poster of it, There are certain things like the Markarian Chain of galaxies which are visible, and there are a lot more galaxies than you’d expect from even 6 to 8-inch telescopes with modern-ish imaging. (When you see the ‘visible’ or ‘photographic’ limit for telescopes, well, it’s based on old things like film.) But to take a spot that was dark and image it, and find roughly 3 thousand galaxies. I didn’t quite realize how impactful that was on understanding just how big and full the universe is. Which admittedly can make you feel rather tiny.

It’s going to be cool to see what JWST makes of it.

If anyone is interested I’ll make a google meet on the calendar. (Please post below) Seems like it conflicts with something else for most people. People can watch it together. It’s not quite a once in a lifetime thing, but it should be a major milestone in terms of understanding the universe. Though the launch is also kinda of a simple thing, rocket launches have always seemed pretty cool. So if you miss it, you can just wait for the science.

Gotta love how astronomy influences things, and it’ll be interesting to see just what the JWST changes.

I’m old enough to remember when the Hale telescope on Mt Palomar was the largest telescope. It’s rather impressive to see side by side comparisons between the best images from terrestrial telescopes and images from Hubble. Hopefully the JWST has had better quality control, Hubble was unusable as launched.

I predict a way will be found to service JWST, both to refuel and to fit improved instruments on it.

Cool launch. Too bad there were clouds but still neat