I was in the last classroom on the left earlier. Someone has used this as a wood finishing area. The odor is aweful and I will not be able to use that room. Due to respiratory sensitivity.
I will pick a different room no problem but I dont want this to turn into a situation where every classroom is used in this way in the future. If we are going to allow this can we designate one room for this please.

Thanks for bringing it to our attention. I’m not aware that we allowed anyone to do that.

It’s an unwritten rule that caustic/high-VOC/flammable finishes are not allowed inside the space. The unwritten nature seems problematic. The Woodshop Access Policy and or Rules may need to reflect this and I will reflect on and accept suggestions on the best way to proceed.

@Frank Was it walnut by any chance? Can you give any other details of how you found the situation? It seems there was someone unfamiliar with the rules elsewhere recently as well and I need to find out who so I can explain why we can’t do this and hopefully keep it from repeating

Edit: "caustic/high-VOC/flammable finishes are not allowed to be used inside the space. In practice small scale projects are often done outside in the smoking area and allowed to fume sufficiently before bringing in. This has often limited the size of projects, and also limited finishes to quick drying solvent based, aster based, or otherwise non-offensive types of finishes.

It was the last classroom on the left I think it was finish that was applied to the woodworking project still sitting there. I believe it was finished elsewhere and placed there to dry/cure. However this process still releases an odor that will likely linger for several months.
I am familiar with what finishes smell like as I to do wood work.

These damn unwritten rules.
Yes, definitely no Make Safely, Clean Up After Yourself, and Be Excellent to Each Other.
The caustic/high-VOC/flammable finishes rule should apply building wide.

I remember being told to do these types of finishing outside when I started at the old space.

Was at the space today and both the halls smelled like nail polish but I’m sure it was something else. Didn’t find anything when I went around to see where it was coming from. More prevalent on the West Hall than the South Hall.

Frank,
It was me. I had no where else to go. We can’t finish projects in the wood shop as it is too dusty. I moved my project outside on a picnic table and got run off by rain. I took my projects home to finish in my garage. We need a booth at the shop for finishing wood projects. I’m not the only one with issues. In the fireproof cabinet by the woodshop there are all kinds of finishing materials. Where are we using them?

Just spitballing here is the old boiler room being used for anything ?
Can it be vented?
Would it create an electrical ignition point with all the breakers?
Can a room be built inside there and vented outside?

The boiler room idea sounds feasible, but venting outside from there would almost certainly result in fumes coming back in elsewhere, unless a chimney taller than the roof peak could be converted.

A dedicated spray room detached from the main building and located downwind during predominantly South Windsor would be the longer term solution. Both for safer use of finishing products and to reduce flammable, volatile chemicals being stored in the building.

Here’s a “Professional Automotive Paint Spray Booth 25Ft x 14Ft x 9Ft w/ Filtration System & fire system” that no one has bid on yet:
https://www.equip-bid.com/auction/18441/item/1018?offset=18
Looks like it would be a bear to move.

Doubt the city would let us do it but a shipping container would make a good spray booth at least bare bones.

I asked city if i could put one on my residential property it was a hard NO!

I’m not prepared to find a link or site it, but I vaguely recall something in our PUD or zoning that talked about spray booths in a negative kinda way. I don’t get the feeling it would be a cheap endeavor if permitted by the city.

Also, there is a restriction in the amount of square footage of space (not very many) we can add on the property that triggers a sprinkler requirement for the existing building which we can not afford.

Again, these are all memories from long ago but I’m happy to dig through the admin drive to find references if this topic moves forward beyond just clarifying policy / training / signage about stinky chemicals.

If a booth of some kind was put in the boiler room, could it be vented up through the existing chimney?

The boiler room is home to a gas water heater and a bunch of potentially sparky breaker panels that aren’t terribly agreeable with clouds of likely explosive fumes. Also, it’s not handicapped accessible.

I have asked a group of leaders of other makerspaces how they handle this. All but one said they made people do it outside. Most cited issues with codes. The one that is trying is the makerspace in KC. He has run into code issues (but I hear the code folks he deals with are trying). His next step is to buy an automotive one…

Because the group LaDeana asked in is private, here is the best and most complete answer she got. 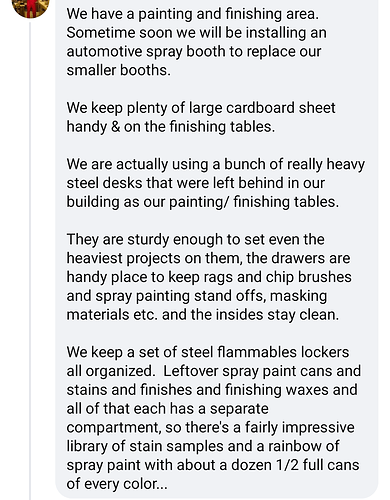 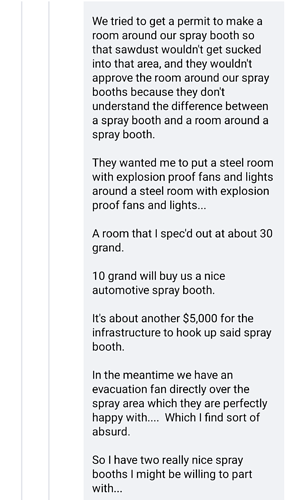