First off, I know I’m preaching to the choir and that EVERYONE is tired of it being ungodly hot in our makerspace. And I apologize if this conversation is already being had in other spaces, both virtual or in person. I don’t want this to sound like a rant or that I’m demanding some action be taken. I simply want to create a thread where we can discuss possibilities of air-conditioning and other ways of making the space more pleasant to do what it’s meant for–to make!

With temperatures regularly in the upper nineties and even 100s, I don’t find the makerspace to be usable most days of the week, if at all. It’s legitimately dangerous to be inside at the height of the day and I worry about our older members if they choose to work in these environments. I was working in the woodshop and got dizzy and just had to call it a day. And as we’re actively trying to recruit new members, the prospect of doing so while inviting them into our current space seems daunting.

I think the best short-term solution would be to include some window units. Perhaps each area could do some of their own fundraising to buy one for their space. I’d personally be happy to spend another $15 a month to help offset higher utility bills if it meant actually being able to use the space from June through August–I’m sure others would agree. And I’m not talking about getting every area down to a comfortable 70 degrees, either. Just something to bring it down so that it’s not unbearable.

Long-term, I think our space has an incredible opportunity for solar power. I just got an estimate for my own home and I was surprised at the financing plans and how much power my house could generate even in a pretty shaded area in Riverside. Think about the amount of energy we could put back in the grid on our roof! It would be a minimal expense when compared to soaring utility bills. Another long-term solution is geo-thermal air-conditioning. There are DIY ways of doing this that we could explore that would help to circulate cool air. Going this route would greatly diminish the long-term costs and repair bills of air-conditioning and traditional HVAC, too. It would also help greatly in the winter to keep our bills down.

I don’t want to propose a problem without being a part of the solution. Climate change is very real and it’s only going to get hotter. Heat waves that stretch into weeks if not months will probably be common in the plains. It gets to a point where the heat really has the possibility to do damage to our infrastructure. We’re already seeing this in other places. I don’t think it’s ever too early to start planning and I’m happy to help with solutions.

I completely agree. Moving air with fans when this hot just makes everything a blast furnace.

How cold is well water?

I was thinking of sandpoints at strategic places half of them bring cold water up to an exchange the other half puts it back down in the ground.

Then we blow air across the exchange.

Not sure that would work now that its typed out.

That’s essentially the thought process behind geothermal. There’s a ton of info out there for DIY geothermal, with the most basic being 6-foot trenches with buried corrugated plastic tubing. Simple air transfer that cools in the summer and heats in the winter. This is low-tech and wouldn’t keep air at a stable 70-80 degrees, but it would help tremendously. More high-tech geothermal includes the use of water to water or water air heat pumps.

Get with James Lancaster on the geothermal stuff. He set aside the old radiators for that future use.

For immediate cooling, as stated in the newsletter, there is a matching fund (of up to $3,000) going to pay for the utilities to keep the AC going. Just fill out one of the donation envelopes at the check in desk and label it for ‘Keep the A/C going’.

There are a couple guys that have been up at MakeICT daily putting in the a/c units we already have. A/c units have already been put into classroom 1 and 3. They are now working on ceramics if I heard them right. They are open to people helping them install the rest of the units they have.

This is great news! I had no idea this effort was going on. That’s on me for not keeping up with the newsletters. I’ll be better about that. Thanks for update! I’ll start putting some money aside for donations. And I’ll see about speaking with James about geothermal. The garden committee wants to install a low-tech one at some point for a four seasons greenhouse, but that’s a topic for a different day.

Approach Elon for a solar roof, it’s a long shot but he is renowned for supporting good causes. Even a significant discount would pay off.

Somebody not too long ago discussed the pros and cons of solar, maybe Rustin. There were several factors brought up. Cost of the system is obvious, but maintenance and insurance were pretty significant, cancelling the savings in electric bills. (Darn cancel culture!) I don’t know how much of a factor scale is. Solar for a residence or small shop is very different from a solar farm and maybe there are grants or other breaks that a makerspace can take advantage of.

I do agree that the temperature must leave an impression on visitors. I know that I try to do my work in the wee hours of the morning to take advantage of cooler outside air, but even drawing 80 degree air into a space that is 85 doesn’t make a huge difference. It’s hard to work on a wood project while dripping sweat onto the wood.

I have wondered how much of an effect the workspace temperature has on the people’s willingness to pay for a membership. I can certainly understand not wanting to be a member during months when using the space would be uncomfortable, and therefore unlikely. I don’t know how much or if membership would increase from adding air conditioning to the remaining spaces.

Just a thought, but has anyone reached out to Maize High School about their solar farm? Don’t they have a massive installation that will pay for itself in a few years from now?

Edit:
I Googled it just now and physics and chemistry teacher Stan Bergkamp was behind the initiative. There was a website setup - Our Initiative | See Beyond Maize

Thanks for this! We’re going to need some buy-in from board members and the president. There are a lot of grants that we could apply for, there’s outreach that we could do to Evergy, state and federal agencies, etc. Perhaps we can add something on the agenda for the next board meeting to discuss this.

Sounds like a great project for the fundraising committee! Something I’m sure we could put some work in on. Our next meeting is scheduled for the 3rd at 7pm if you’d like to stop by.

Evergy requires some of their employees to be involved in the makerspace for us to be eligible for any grant money from them. If you know of anyone employeed by Evergy who is also a member of the makerspace please let fundraising know.

The ceramics department had the opportunity to be involved with teaching kids from hutch ceramics but after walking into the ceramics studio and feeling the heat they declined. Hopefully this fall after it cools off they might approach us again. I can’t handle being at Makeict, I only come in briefy once or twice a month if that. The last time I was there I became dizzy and felt sick the rest of the day. We have a creek, can we do some type of MISTING Sytem like the kind they have for outdoor spaces and use creek water and a solar pump to create a misting system around the building. A mister usually drops the temp by 10 degrees. Just an idea

Another idea hit me, Could we get Window units for each area but run those AC Units of an Individual Solar panel hooked to its own idividual Marine battery/batteries. Like a little enclosed locked box to house and protect the battery? There are so many smart and ingenious people at Make ict we should be able to come up with an awesome plan

Misting the creek water has a interesting set of issues, but it is generally agreed that the heat is a detriment heck I was there the other day in the afternoon and looked like I had swam in the creek.

What color is the roof BTW? Would it help to paint it white? 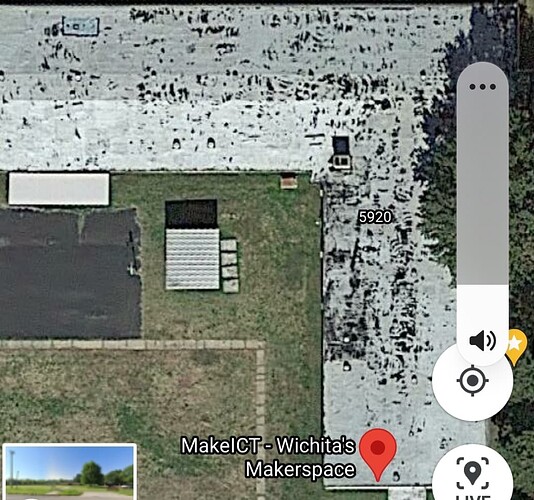 Swamp coolers are great for large areas where there isn’t a lot of stuff sensitive to moisture. For sure, that would be a bad idea for the wood and metal shops.

Swamp coolers can be a source of Legionnaire’s if not carefully maintained to prevent mist. Any water source containing amoeba are to be strictly avoided as amoeba are the host that the bacteria parasitize.

Swamp coolers and misters work to a point, but if it is already humid out the benefit is negligible. Plus the creek water has run off from the nearby highways and residential areas during rainstorms and water born nasties. It might help mitigate heat if the roof had a brand new coating of silver seal, but I have no idea how much we would need. In the end though everything boils down to the need of a way to pull heat out of the space.